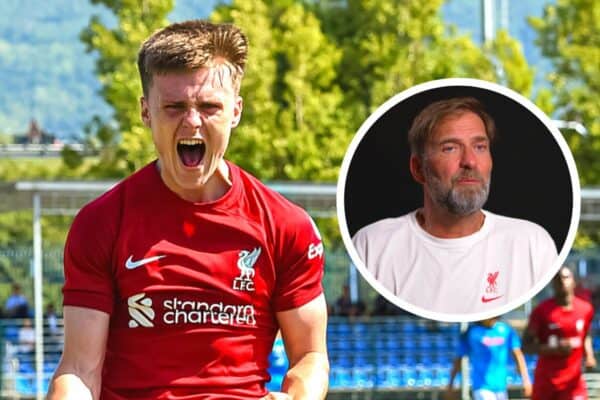 With Liverpool set to return to action with a friendly match against Lyon in Dubai on Sunday, Jurgen Klopp has named three young players impressing him during the Reds’ warm-weather training camp.

Thirteen academy prospects are part of Liverpool’s 32-man squad in the UAE, with Klopp and his coaching staff keeping a close eye on the talent emerging from the younger age groups.

The boss says the trip to Dubai has been a valuable opportunity to bring the club’s young players “closer” to the first-team set up, singling out three who he says are “really interesting players.”

Speaking ahead of the Reds’ return to action this weekend, Klopp named Stefan Bajcetic, Ben Doak and Bobby Clark as three particular youngsters he’s glad to have with him in Dubai, and also said it was a “very important” time for Calvin Ramsay to build up his fitness.

“Because we have so many young players with us as well, it’s very important to bring them closer,” Klopp told LFCTV.

“For example, young Calvin had no pre-season with us, now this is his first pre-season. He was long out, very important for him to get to know everybody and all of these things.

Bajcetic, Doak and Clark have all featured for the first team this season, with the former involved with Klopp’s squad since the summer’s pre-season preparations.

Klopp continues to refer to Liverpool’s current camp as another “proper pre-season” and has been pleased with the work his side have got through in Dubai so far.

“It’s a proper pre-season,” he continued.

“Yes, with different aspects because we were not together for two-and-a-half weeks, around about.

“But the boys had nine sessions in these two-and-a-half weeks, just not with us, so it means the physical part is more or less done. What you do in a pre-season usually, you have to invest a lot of effort in that.

“We don’t do it here, we started pretty quickly with tactical things, we have meetings every day. I enjoy it a lot, to be honest. The training looks really good.”

The Liverpool boss says there has been a big emphasis on tactical work and meetings at the camp, and has been impressed by the players’ work ethic since arriving in the UAE at the start of the week.

“We are really busy here with the boys,” he continued.

“They have time off, of course, but every night so far we had an analysis meeting, team meeting where we showed the boys how different things should look.

“It’s not like in school where you think, ‘Oh my God, what is he talking about?’

“So, it’s our football and the atmosphere in these meetings I love really because I can see the eyes of the boys [that] we are really onto it.”