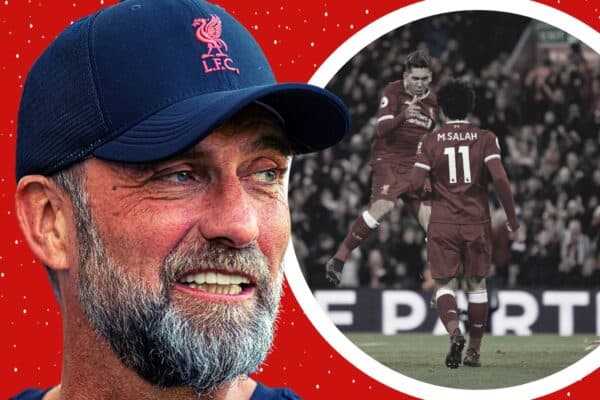 Not for a want of jinxing Liverpool’s trip to Aston Villa, but it’s safe to say Jurgen Klopp is quite adept at delivering late Christmas presents at Liverpool.

Aston Villa are the opponents and Villa Park is the backdrop this time around as the Premier League returns following the World Cup break.

It is the fifth Boxing Day fixture since Klopp arrived in 2015, and the four fixtures on this day so far all have two things in common: a clean sheet and three points.

And the aggregate score for those four games reads 14-0 in Liverpool’s favour. Talk about a welcome late Christmas present!

The Reds, of course, tore the Foxes apart in 2019 on return from their Club World Cup triumph, with Roberto Firmino, James Milner and Trent Alexander-Arnold all on the scoresheet in a 4-0 win.

It was the same scoreline in 2018 as Dejan Lovren, Mo Salah, Xherdan Shaqiri and Fabinho all scored without reply against Newcastle – but it could not top the 5-0 thumping of Swansea at Anfield in 2017.

Philippe Coutinho, Firmino, Alexander-Arnold and Alex Oxlade-Chamberlain all scored that day, with three goals coming in 14 second-half minutes to blow the Swans away.

As for the first Boxing Day under Klopp, Christian Benteke’s strike was responsible for a modest 1-0 win over Claudio Ranieri’s Leicester, who would go on to lift the Premier League title that season.

So, four Boxing Day games under Klopp for four clean sheet victories – the question is, can it soon be five from five?

Aston Villa are now under the guidance of Unai Emery following Steven Gerrard’s dismissal in October and they got to work over the break, playing four friendlies (two defeats, one win and win draw) to Liverpool’s two (one win, one defeat).

Here’s hoping for another belated Christmas present from the Reds!