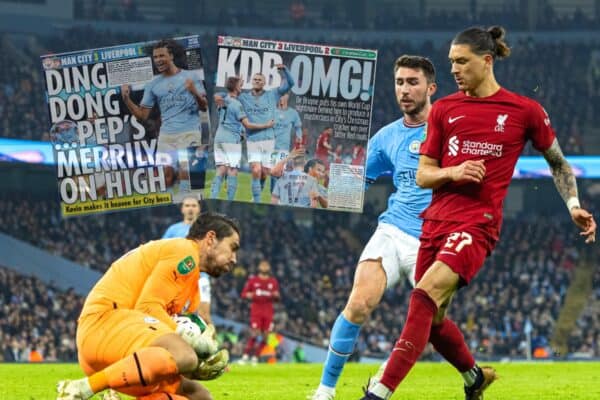 Liverpool may have been knocked out of the Carabao Cup by Man City, but the media still found some positives after the game.

The Reds were beaten 3-2 at the Etihad on Thursday night, as a patched-up team found themselves narrowly outplayed by their rivals.

Fabio Carvalho and Mohamed Salah scored the goals for Jurgen Klopp‘s men, who played their part in a pulsating post-World Cup clash.

Here’s how the media reacted to Liverpool’s defeat.

The returning Reds were assessed after a long absence…

Richard Jolly of the Independent revelled in a thrilling encounter, admitting that Liverpool deserved to lose:

“City were worthy winners, the superior side for the most part and creating sufficient chances that they could have scored a hatful.

“And yet, in a theme of recent title races, Liverpool showed their powers of recovery by twice pulling level. City struggled to kill them off.

“Even as a gap has opened up between them in the table, Liverpool might have beaten City in a fourth different competition in eight months had Darwin Nunez shown greater accuracy in front of goal.

“Sent off for haranguing an assistant referee the last time he beat City, Klopp left his technical area this time to share a smile with Guardiola and this was another epic to show how absorbing their rivalry remains.

“They were stripped of some of their premier personnel, with six of City’s World Cup contingent starting and only Nunez of Liverpool’s, but enough remained to render this a classic.”

“If the rest of the season is going to be anything like this, then the World Cup will soon be a distant memory.

“Both Guardiola and Klopp would, one imagines, have preferred a quieter return to action than this one, after nearly six weeks out of action, but nobody watching was complaining as, from the first whistle to the last, City and Liverpool tore into each other, renewing a rivalry that has exploded in recent years, and providing a hell of a spectacle in the process.

“It was thrilling stuff, end-to-end and with no real let-up in intensity. City had the edge, you felt, but every time they threatened to run away, back came Liverpool. Had Nunez had his shooting boots with him, Klopp’s side might have pinched it.

“The rest of us? Well, we’re just glad to have the proper football back, right?”

David Lynch took to Twitter to say that it was a tough game to gauge Liverpool, following their six-week break:

Difficult to measure where Liverpool are at after the break given the changes and the fact that City also struggled for control when it is rarely an issue for them. True test comes at Aston Villa when Klopp will be desperate to see improvements on the first part of the season.

The Liverpool Echo‘s Ian Doyle felt the Reds could take clear “encouragement,” despite the result:

“This wasn’t the refresh Jurgen Klopp had wanted. But that Liverpool trudged from the Etihad pitch lamenting a missed opportunity spoke volumes.

“While relinquishing their grip on hard-earned silverware can never be regarded a positive, those wishing to use this exit from the Carabao Cup as a stick with which to once again beat the Reds would be somewhat missing the point.

“Indeed, Klopp and his coaching staff can extract sufficient encouragement from a performance that, while by no means outstanding, ensured Manchester City were made to scrap for their fourth round victory.

“Certainly, there could be no doubting the character and mentality of Liverpool which at times was questioned during the difficult opening few months to their campaign.”

Darwin Nunez proved to be an erratic presence for Liverpool…

Jones thought the wasteful striker was ultimately pivotal to the outcome in Manchester:

“On another night, Nunez would have been the hero, but you have to take your chances in a game like this, against opponents like this, and unfortunately for Liverpool, their big-money summer signing failed to do so here.

“The Uruguayan finished with an assist, and a fine one at that for Mo Salah, but he should really have had a hat-trick.

“It wasn’t for the want of trying, but it was costly, as far as Liverpool were concerned.”

The Mirror‘s Josh O’Brien was disappointed by the Uruguayan’s showing:

“Liverpool’s mega-money summer signing has divided opinion since arriving from Benfica and performances like this one are precisely why.

“Darwin Nunez was guilty of missing two big chances for the Reds in the first-half, fizzing both efforts wide of the bottom left corner having been given time and space inside the City penalty area.

“And yet, there were still flashes of the 23-year-old’s promise and potential – most notably in the build-up to Liverpool’s second.

“The Uruguay international burned Laporte for pace, showing the kind of speed that strikes fear into the heart of just about every central defender.

“That same pace presented Nunez with the chance to make amends for his profligate finishing in the first-half with 20 minutes to go, but yet again he dragged his strike wide.”

This Is Anfield‘s Mark Delgado was similarly critical of Nunez on the night:

“Most of the Reds’ chances fell the way of Darwin Nunez on the night and it has to be said, he wasn’t exactly in what we might term ‘ABCD mode’ – aerial, bulldozing, clinical Darwin.

“No, this was the other side of him – always an outlet, definitely causing chaos, but without the right decision or finishing touch at the end of his runs on too many occasions.

“Notably, the one time he got it exactly right was the time he didn’t even shoot – he squared it for Salah to immediately equalise at 2-2.

“The rest of the time, his diagonal runs came in off the right flank or the inside-right channel, making it a slightly awkward angle for a right-footed shot across the ‘keeper.

“Even so, at least a couple of those chances should have hit the target and at least one surely should have found the back of the net.

“Instead, three times he dragged it across and wide, with none really struck too cleanly. Another day he probably blams in all three and the Reds go through.”

A massive chance for Liverpool to get level again but Darwin Núñez can only drag his shot wide of the post! ? pic.twitter.com/dkeAtIj9pD

“Seven points, one game in hand. That’s the story facing Liverpool across the next 24 matches of Premier League football, with both Man United and Tottenham (or Newcastle, not bothered which) needing to be overhauled.

“Don’t be in any doubt: Liverpool and Klopp might have wanted to win this game at City in the way they want to win any game they play in, but this wasn’t remotely a priority.

“Getting game time, sharpness and minutes in the legs was, in preparation for December 26 and a trip to Villa Park.

“On we go to real matters and there’s no escape from next time out onwards.”

Finally, Doyle was another who suggested that the defeat will mean nothing if Liverpool now kick on with key players back:

“Had Van Dijk been present in the Liverpool backline, there’s every chance Erling Haaland wouldn’t have had the space in which to fire City’s opener, nor Ake the freedom at the far post to net the decider.

“The merit of Klopp’s decision to view the bigger picture will only emerge in the coming months.

“And if Liverpool’s win over City in the Community Shield was far from indicative of what was to come, Klopp will hope this avoidable exit proves a similarly iffy barometer.”