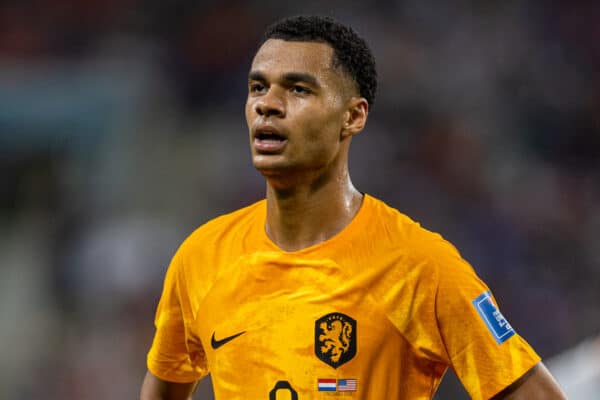 Liverpool have entered advanced negotiations for Netherlands attacker Cody Gakpo, according to reports on Monday evening.

The Reds have been tentatively linked with the 23-year-old in recent weeks, especially following an impressive World Cup for the winger, and news emerged of Liverpool’s move shortly after their win at Aston Villa.

The highly reliable journalist Paul Joyce, of the Times, reports that Liverpool have made their move in an attempt to beat Man United to his signature.

Joyce reports that “negotiations have reached an advanced stage with PSV Eindhoven for the attacker, who is valued at between £45 million and £50 million.”

UPDATE: The news has now been confirmed by PSV.

The news has also been corroborated by the reliable David Ornstein of The Athletic, who writes that Liverpool hope to tie up the deal quickly and the price will be an initial £37 million.

Liverpool have been linked with a move for Gakpo as far back as March, when they were said to have held “serious conversations” with PSV.

Gakpo, who scored three goals in five World Cup appearances for the Netherlands, plays predominantly on the left of the front three – a position which is highly needed after long-term injuries for Luis Diaz and Diogo Jota.

That this news has emerged means a deal is highly likely, with Liverpool rarely leaking news of negotiations until something is close.

Virgil van Dijk was asked about Gakpo potentially moving to Man United during the World Cup, with the Liverpool defender brutally saying: “Are Manchester United and Real Madrid on the same level (as each other) at this moment?

“No disrespect, not at all.

“I think he definitely has a next step in him. I definitely feel like it could happen. Whether it happens in the winter or next year, time will tell.

“But he’s a great boy, works hard, is very talented and there’s definitely more in him.

“We are very pleased he’s doing so well and long may it continue.”

Who is Cody Gakpo?

Gakpo is a 23-year-old, right-footed winger who predominantly plays on the left of a front three.

He was already linked with a move away from PSV before a standout World Cup with the Netherlands.

Gakpo has an impressive 13 goals and 17 assists in 24 appearances for PSV this season.

The big question will be whether he can translate form in the Eredivisie into the Premier League.