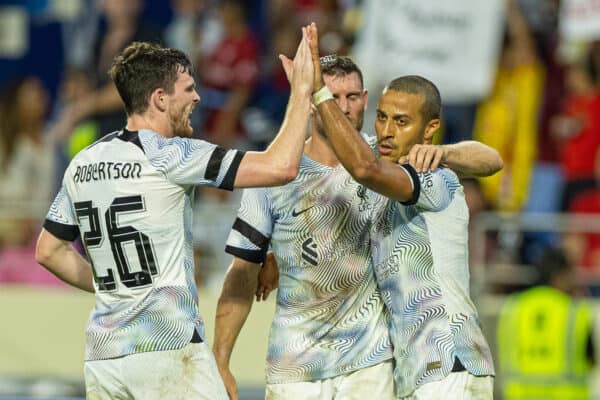 After scoring in Liverpool’s 4-1 friendly victory over AC Milan on Friday, Thiago says he believes the Reds must “improve everything” if they are to achieve anything in the second half of the season.

Jurgen Klopp‘s side concluded their mid-season training camp in Dubai with an impressive win over the Serie A champions, with Mohamed Salah and Thiago on the scoresheet in the first half, before Darwin Nunez‘s brace in his first match since returning from the World Cup.

Thiago‘s goal was a typically classy strike from the edge of the area, with the Spaniard in good shape ahead of Liverpool’s return to competitive action next week.

And speaking after the match, he challenged his team-mates to improve all aspects of their game in the coming months, and says that despite their tricky start to the season, they will continue to chase silverware.

“Everything,” he said in an interview with LFCTV when asked what he’d like to see Liverpool improve.

“As a football player, as a Liverpool player and a Liverpool fan, I think we have to improve everything.

“We have to achieve all trophies possible. We have to start to chase for first position again, we know it’s tough, but there’s other competitions as well, so we’re trying to chase everything.”

The midfielder was also pressed for his thoughts on Liverpool’s young players, with the likes of Bobby Clark and Ben Doak impressing off the bench against Milan.

Clark set up Nunez’s first goal with a pass Thiago would have been proud of, and Liverpool’s No. 6 has been impressed by the “intelligent” players coming through the ranks.

A brilliant ball from Bobby Clark, met by a cool @Darwinn99 finish ? pic.twitter.com/yI1Csna3Gc

“Fortunately, the academy is doing great, we have not just young talented players, but also intelligent players here,” he continued.

“They get very quickly how we train, how we play, how we press. I think we have great talents coming through and they will 100 percent do great in the future.

“It’s great to have them here because they learn things from the guys, they also put their skills on the pitch, but also, we love to train and play with the young kids because we can see how they can progress and how they’re doing as well.”