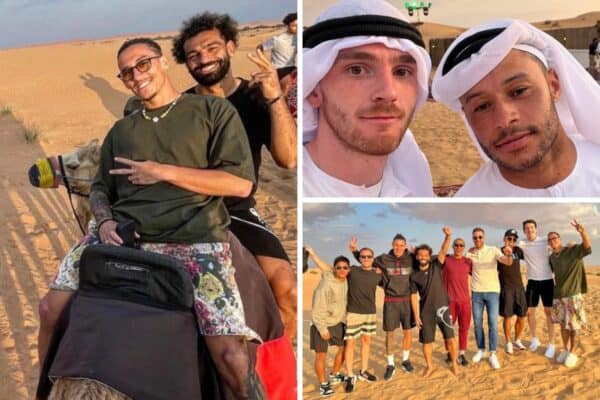 There was time off for the Liverpool squad as they headed out to the desert for camel rides in Dubai, with Kostas Tsimikas, as ever, at the heart of things.

While the Reds’ primary focus while out in the United Arab Emirates is to train and prepare for the second half of the season, the break also serves as an important time to bond.

It is already a strong squad off the pitch, but with the inclusion of youngsters and the four signings from the summer, there are still new relationships to build.

And, of course, old ones to strengthen, with Tsimikas and Mohamed Salah sharing a camel as they were guided through the desert on Wednesday:

Adrian plays a key role in helping the squad to gel, and the Spanish goalkeeper shared a photo of him alongside Tsimikas, Salah, Thiago, Darwin Nunez, Arthur, Roberto Firmino, Fabio Carvalho and academy stopper Marcelo Pitaluga:

The presence of Arthur, Nunez and Carvalho in particular shows the value in these trips, as they continue to adjust to their new surroundings after summer moves.

For Pitaluga, too, it is a crucial time, with the youngster still settling into the first-team setup on an enforced break from his loan with Macclesfield, where he recently suffered ankle ligament damage.

While riding their camels, the squad were paired off, with Adrian riding alongside Thiago, Firmino sharing with Carvalho and Nunez joined by Arthur.

Adrian and Tsimikas stuck together afterwards, with the pair sharing a photo wearing authentic thawb and ghutra, while Harvey Elliott took part in falconry:

It will have been a welcome break for the squad from gruelling training sessions in the Dubai heat, but their focus will now turn back to football.

Friday brings their second and final friendly of the break, against AC Milan at the Al-Maktoum Stadium.