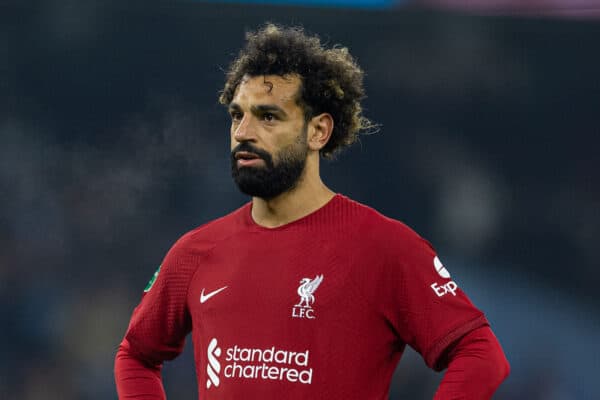 Liverpool had their chances in a 3-2 defeat away to Man City in the Carabao Cup, but not enough players hit their top level to deny Pep Guardiola’s side.

The Reds returned after nearly six weeks away on Thursday evening, in what was a daunting first fixture back for Jurgen Klopp‘s side.

The visitors found themselves behind on three separate occasions, and while Fabio Carvalho and Mohamed Salah found the net, it wasn’t enough to get their side into the quarter-finals.

Caoimhin Kelleher (6.9) earned the highest overall rating at the Etihad, as he again proved to be an able deputy to Alisson.

The Irishman was highly impressive between the sticks, making three important saves and doing nothing wrong all evening.

TIA’s Henry Jackson said it was an “assured” performance by Kelleher, adding that his handling was “immaculate.”

Meanwhile, the Echo‘s Ian Doyle highlighted the “good saves” made by the youngster, even though he was “almost caught out” in the first minute.

In second place was Salah (6.6), who got his customary goal, his third against City this season, and always looked like he could give their defenders a headache.

The Egyptian King had both a 100 percent shot and cross accuracy against Guardiola’s men, FotMob noted, and took his goal with aplomb.

Thiago (6.5) was up next in the ratings, following a classy showing that saw him “drag Liverpool into the game,” according to Doyle.

The lowest rating on the night went to Joe Gomez (5.2), who switched off to allow Erling Haaland to put City 1-0 up early on.

Jackson went as far as to say that “it feels as though Gomez’s peak may have been and gone,” following such bad luck with injuries.

Next up for Liverpool is a trip to Aston Villa on Boxing Day (5.30pm GMT), as the Reds return to Premier League action.