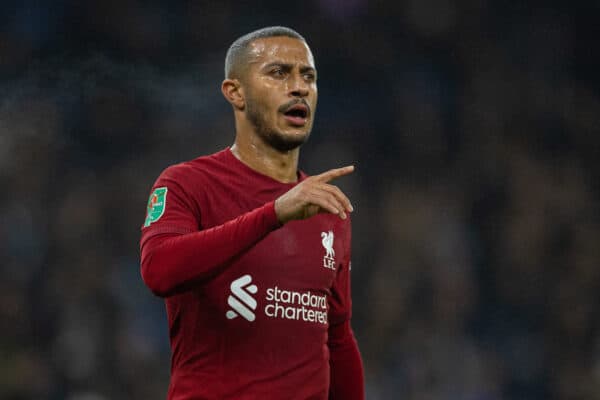 Liverpool were beaten 3-2 at Man City in the Carabao Cup fourth round on Thursday, but numerous Reds players still performed well.

Kelleher has been a hero for Liverpool in the Carabao Cup in the past and he started in place of Alisson at the Etihad.

This was another assured performance by the young Irishman, despite conceding three, including one great save with his legs to deny Ilkay Gundogan.

He also thwarted Nathan Ake soon after and his handling was immaculate throughout.

As seems to have been the case for years now, Milner was required in an auxiliary right-back role.

The 36-year-old was given the runaround by Cole Palmer during the first half, although he did provide the assist for Fabio Carvalho‘s equaliser.

Left the field with an injury before half-time – Liverpool’s fitness woes just won’t go away.

Who else has really missed Matip these past six weeks?

The centre-back was largely faultless against City, coming out with the ball and playing a pivotal role in Carvalho’s goal with a threaded pass into a dangerous area.

Strong defensively, too, even if there was the odd sporadic moment of rustiness on and off the ball.

With each passing appearance, the more it feels as though Gomez’s peak may have been and gone.

While a naturally gifted player, he lacks a genuine defensive head and he switched off badly for Erling Haaland’s opener.

Did better at right-back after Milner got injured, but big doubts linger over his long-term worth.

Robertson was in impressive form before the World Cup and he was his trademark reliable self on Thursday evening.

There was nothing spectacular on show, but he got the better of Riyad Mahrez in patches and attacked well when the opportunity arose.

Didn’t get close enough to Mahrez for his goal, though, which loses him a mark.

Bajcetic was handed just his second-ever start for Liverpool and he was looking to continue enhancing his growing reputation.

This was a tough outing for him, however, as he came up against a hugely experienced midfield that included Rodri, Gundogan and Kevin De Bruyne.

One lovely long ball to Carvalho stood out, and he was calm in possession, but he struggled to win the physical and tactical battle.

Thiago was criminally left out of Spain’s World Cup, but it was beneficial to Liverpool, allowing him to remain fresh over the past month.

He was solid against Pep Guardiola’s side, give or take the odd moment of madness in possession, and he produced some typically eye-catching touches and passes.

Such an important player between now and the end of the season.

Elliott has been one of the Reds’ better players so far this season and this was a big test of his credentials in midfield.

After struggling to get into the game early on, the teenager grew into it, using the ball intelligently and looking to provide guile.

Not his greatest showing, by any means, but he feels like a fixture in the team now, rather than just a young hopeful.

Salah will have been itching to be back in action, but he had to accept feeding of scraps for much of the night.

He made good runs into dangerous areas and always troubled City’s defence, but more often than not, it came to nothing.

Made it 2-2 early in the second half, however, prodding home to score his 171st goal for Liverpool.

With Luis Diaz and Diogo Jota both injured for the foreseeable future, Carvalho could earn regular minutes in the coming weeks.

Having been on the periphery for the opening 20 minutes, looking weak physically, the youngster equalised with a precise finish to silence the home crowd.

His involvement remained hit-and-miss, though, and he was replaced at the break.

Nunez led the line against City, looking to continue the promising form that saw him win November’s Player of the Month award.

This was a night that summed up the Uruguayan’s raw nature, though, as he fired wide three times when he really should’ve at least hit the target once.

His pace and power always made him a threat – he assisted Salah’s goal – but more is needed in such high-profile matches.

The Bolton Baresi made one superb tackle on Haaland that he will be able to tell the grandchildren about, and did well overall.

A feisty showing from the Brazilian, who got into a scrap with Rodri at one point.

Great ball in the lead up to Salah’s strike, and looked sharp overall.

Linked up down the right a few times, but generally unnoticed.

Couldn’t get into the game.

Wasn’t it great to see Klopp again? It’s felt like a lifetime!

It was always tough to predict which Liverpool would show up after a long break, but the German got a committed performance out of his players in the toughest game possible in the fourth round.

Granted, the Reds’s midfield got bypassed too easily at times, and the first 20 minutes were poor, but this was a great runout ahead of more important fixtures.

Klopp will be disappointed to be out of the Carabao Cup, but he will find clear positives, as should supporters.