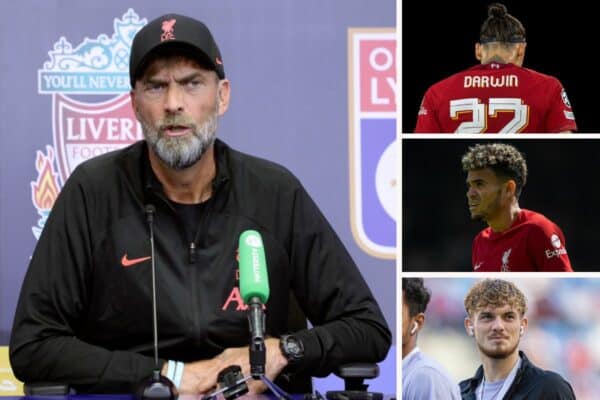 Liverpool’s return to action saw them beaten 3-1 by Lyon on Sunday. In his post-match press conference, Jurgen Klopp provided updates on Darwin Nunez‘s return, updates on the fitness on Harvey Elliott, Luis Diaz and more.

Five Liverpool players crashed out of the World Cup in the quarter-finals this weekend, with Klopp confirming they will now be given a week off before reconvening with the rest of the squad.

Darwin Nunez, however, will begin work in Dubai on Monday, with his Uruguay side failing to make it past the group stages.

“Darwin Nunez will join us tomorrow and the others… everybody gets a week off after the World Cup to reset mind and body,” Klopp told reporters.

“And then we play pretty quick, 22nd of December we play Man City in the [Carabao] Cup.

Elliott could be seen shaking his head when he was withdrawn from the action with an injury in the first half, but the boss is hopeful the problem isn’t anything too serious.

“Harvey got a knock before we scored, but I think we were lucky,” he explained.

“He looks fine now but he feels it, that’s normal, there was contact. But I hope we were lucky in that moment.

“When I came in at half-time it was assessed, and everyone was rather like this [thumbs up].”

New Diaz injury “a smash in the face”

Having initially returned to training at the start of the week, Klopp has described Diaz’s new injury as “a smash in the face.”

The club are yet to place a timescale on his return, but reports in Colombia state he could now be out until March.

“Yeah, he was not in the best possible place,” Klopp said.

“It’s clear it’s a big disappointment for all of us, for him as well.

“It was a non-situation in training, honestly – nothing, felt something. [He] didn’t feel a lot next day but we wanted to be really cautious and said, ‘OK, come on, let’s have a look.’

“Yeah, then the news came and it was a proper smash in the face. But that’s it now.”

Two players who have overcome injuries for the time being are Joel Matip and Naby Keita, who both featured against Lyon.

Klopp is pleased to have both players available for selection, and says he will look to give them more minutes against AC Milan on Friday.

“Yeah, so far he did pretty much everything in training. There was one session where we got advice to rest him a little bit, but it was not from him, it was from the medical department, [so] that’s what we did. Apart from that he could do everything.

“Looked good today, 45 minutes was again what we were allowed to use him. That’s what we did. That’s good.

“Naby’s first 30 minutes, I think, for a while. Very helpful as well, important position, important player, so that was [what] we should only use him [for], 30 minutes.”