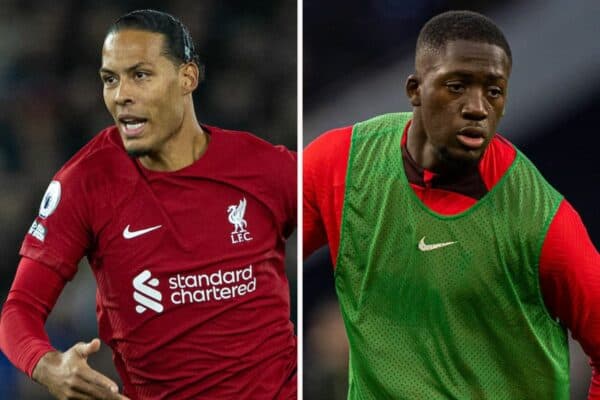 After Liverpool battled their way to a 2-1 victory against Leicester on Friday night, many of the players seemed to accept that the Reds were not at their best in their final match of 2022.

Two own goals from Wout Faes saw Jurgen Klopp‘s side come from behind to secure all three points on a night where they were fortunate to come away with a victory.

Nonetheless, it was another valuable win for Liverpool, who have now won four games on the bounce in the Premier League, closing the gap on fourth placed Tottenham to just two points.

Virgil van Dijk and Ibrahima Konate were among those to post on social media after the game, with both cherishing Liverpool’s return “home,” after their first match at Anfield since November 12.

Other Liverpool players focused on the team’s ability to grind out a victory on a night where they were far from their best.

After it was revealed that he was to be awarded an MBE, Andy Robertson thanked the fans for their support this year, while Harvey Elliott and Stefan Bajcetic praised the fight shown from their team-mates.

Speaking to LFCTV after the game, Trent Alexander-Arnold said the fact Liverpool managed to find a way to win the game without performing at their best could be viewed as a positive thing.

With 22 league games still to be played, the right-back is confident the Reds can still go on to challenge at the top end of the table between now and the end of the campaign.

“That’s one thing that we can take away from this game: going behind against a good team and managing to win and see the game out as well, because they piled the pressure on, changed their system in the second half and really came at us and pressed us high,” Alexander-Arnold said.

“It wasn’t a pretty game at all but we got the job done and it was about getting over the line at the end.

“Like I said, three points is three points, we’ve put ourselves in a good position. [We’ll] keep chipping away and hoping that people drop points around us.

“We’re still not even halfway through the season so there are still a lot of games to play [and] a lot of things can happen.

“We found ourselves in quite a similar position last year, chasing [Manchester] City at this time of year [when we were] 10 or 11 points behind them.

“But people do drop points, no-one is going to go unbeaten or not drop any points from now until the end of the season.

“Hopefully it’s us who do that but it’s unlikely any team will so we’ve got to make sure we are in positions to pounce when teams drop points around us.”

Elsewhere, after coming off the bench to replace Andy Robertson in the second half, Kostas Tsimikas brought up his 50th appearance for Liverpool.

Fabinho wasn’t involved after his partner Rebeca went into labour on Friday, and a tweet from her on Saturday morning seemed to suggest that she had given birth to a baby boy on New Years Eve.

Congratulations to Fab and Rebeca!