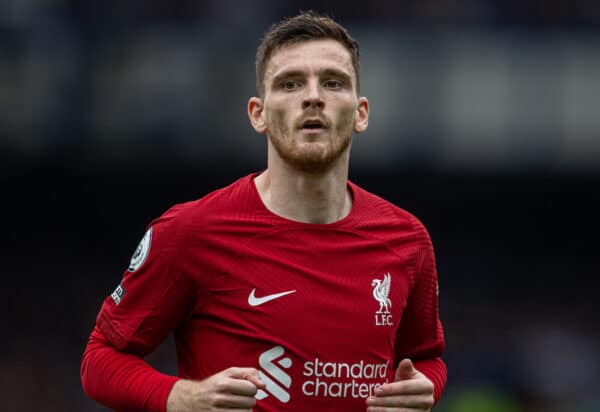 Andy Robertson is among those to be recognised in the New Year Honours list.

The Scotland captain has been recognised for his achievements in the game, as well as his charity and community work off the pitch.

Earlier this week, Robertson broke the record for the defender with the most assists in the history of the Premier League, and his stock continues to rise at both club and international level.

His journey since being released as a teenager by Celtic, his boyhood club, is a hugely impressive one. His first taste of senior football came at Queen’s Park, before he later moved on to Dundee United and Hull City.

Some eyebrows were raised when Liverpool swooped to sign him in 2017, but for a fee of just £8 million, it would go on to become one of the most successful transfers in their recent history.

Robertson has since established himself as one of the world’s best players in his position, playing a key part in all of Liverpool’s success under Jurgen Klopp.

To date, he has made 243 appearances for the club, winning the Premier League, Champions League and FIFA Club World Cup among other accolades.

Towards the end of 2020, he launched his own AR26 Charity, with the intention of providing young people in Scotland with equal access to training, support, jobs and free football coaching.

“It’s great to see recognition of our men’s football captain Andy Robertson, not just for his efforts on the pitch but for his work with young people,” said Scottish Secretary Alister Jack.

Earlier this year, James Milner was awarded an MBE of his own for services to charity, while Jordan Henderson also received one in 2021.

Robbo has certainly come a long way since stacking those shelves in M&S! Well deserved!