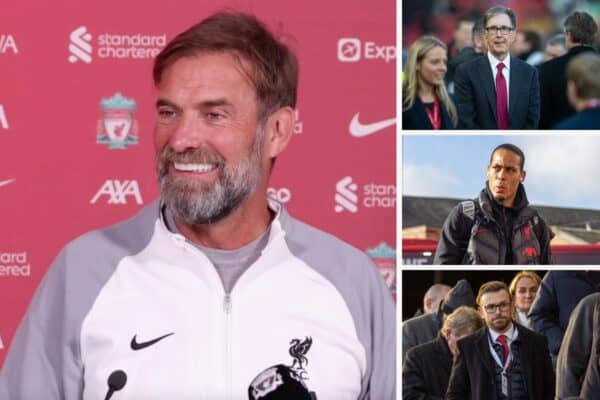 Jurgen Klopp was back in front of the cameras as he looked ahead to Monday’s game, but focus was largely on investment, squad updates and the looming exit of Julian Ward.

Here are four key points from the manager as he previewed the Boxing Day clash at Aston Villa:

The shock news of sporting director Julian Ward handing in his resignation came in November, a surprise not only to fans but for Klopp as well.

“It was a surprise when Julian told me, but we will work completely normal together until the day he leaves,” Klopp said.

“He is 100 percent committed, we’ve never had a problem. Everything is fine. He told us I think after the Southampton game, I was surprised but it’s his decision.”

It’s been just months since he took over the role from Michael Edwards.

Time for a quick squad update

Injuries and illness have again proved a nuisance for Klopp and the boss provided a few updates on his squad ahead of Monday’s game:

Every reason for optimism

The trip to Villa is the first of five match in 19 days and Liverpool have a lot of catching up to do, a fight that Klopp is embracing.

“We are really looking forward to what’s coming up, but we know it’s intense and there are no guarantees out there,” he said.

“We consider ourselves in punching distance and we have to chase, that is what we will do. We have left a gap between us and there are much more exciting positions in the table.

“There is reason for optimism, definitely.”

With this the first pre-match press conference for the manager since November, questions about the January window and future investment were always to pop up.

“I don’t know the amount of money it would take, but I’m not against investment, to be honest, that’s clear,” Klopp said in light of Jamie Carragher’s £250 million claim.

“We will see what the future brings, nobody knows that in the moment, but I’m still convinced the future is bright for us.

“January, in our situation, is a window where we always say we’re always prepared, that’s how it is.”