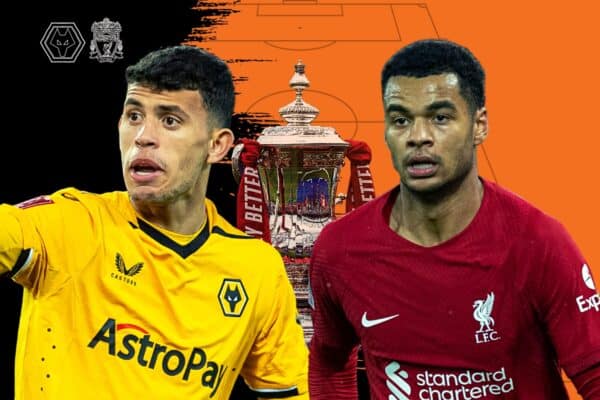 10 key things to know ahead of Wolves vs. Liverpool replay

It has been a bleak few weeks from a Liverpool perspective, but can the current FA Cup holders get back to winning ways on the road at Molineux?

A frustrating 2-2 draw in the reverse fixture at Anfield was followed by further turmoil at Brighton.

Times are hard for Liverpool and fingers are being pointed in all directions in an attempt to decipher the source of the problems.

It was a game nobody wanted as the referee blew for full-time at Anfield in the first tie, but the replay offers Liverpool a chance to carve out some sort of momentum heading into a tricky period of fixtures domestically and in Europe.

Liverpool’s failure to see out the third-round tie at Anfield has set up their first FA Cup replay since Shrewsbury Town came to Merseyside in 2020 and succumbed to a 1-0 defeat.

On that occasion, Jurgen Klopp opted to field the club’s youngest-ever XI and left Neil Critchley to take charge as he and the first team observed what was supposed to be a pre-arranged winter break for top-flight English clubs.

It was a decision which prompted an open letter from the Shrewsbury hierarchy, who felt aggrieved and felt that Klopp’s decision had ‘ruined’ the tie and caused the replay to miss out on TV coverage which would have elicited a big financial reward for the club.

Of all of the trends to come from Liverpool’s season so far, the persistent habit of conceding the opening goal is perhaps the most unsettling.

In total, 53.6 percent of Liverpool’s games this season have seen the opposition get on the scoresheet first, a pattern which began to creep in towards the end of the quadruple chase in 2021/22.

If the Reds are to progress in the competition then landing the first blow in this one will go a long way to making life easier for themselves.

Liverpool’s £37 million Dutch winger has been presented with a baptism of fire since he arrived at the club.

Cody Gakpo has yet to experience a victory with his new teammates, but there have been some positive signs from the newbie.

A replay against what is likely to be another rotated Wolves side arguably presents a good opportunity to open his account.

The recent injury issues among the forward mean that Gakpo is likely to be called upon from the start and for the foreseeable – it is a great chance to announce himself.

In his pre-match press conference on Monday, Klopp confirmed that “we will make changes,” with James Milner and Stefan Bajcetic both fit.

Darwin Nunez is expected to be unavailable, though, which could hand an opportunity to Ben Doak.

Doak has been a permanent fixture in matchday squads since the World Cup break, coming on against Wolves and Derby in the cups and even getting league minutes against Aston Villa and Brighton.

With Luis Diaz, Diogo Jota, Nunez and Roberto Firmino all still out of action, the stage could be set for the 17-year-old to get his first senior start in the cup replay.

He is a player who the manager is clearly fond of, and at a time when supporters are frustrated with the majority of the squad, he is a player who will no doubt be afforded more time and patience given his age.

Kostas Tsimikas, Joe Gomez and Naby Keita are among the other players who could be rotated in.

5. A big night for the manager

“It is fully my responsibility.”

You’d have to search high and wide to find a Liverpool supporter that doesn’t still implicitly trust Klopp, but for possibly the first time during his reign the team look to be on a downward spiral and a victory here is the first step to stop the bleeding.

The replay is the last thing the manager will have wanted in an already crammed schedule, but momentum plays a huge role in football and one win can quickly set you on a different path.

The German often speaks about rhythm with his players, but given the recent form and the fact this fixture will be shortly followed by Chelsea‘s visit, it will be extremely interesting to see how the side lineup.

Liverpool can’t seem to buy a win on their travels at the moment.

There have been just four occasions in all competitions in which the Reds have taken the spoils on the road this season, and defeats to Brentford and Brighton have compounded the recent struggles.

Molineux was the setting for yet another late moment of Divock Origi magic last season, with the Belgian netting a 94th-minute winner in an otherwise uneventful 1-0 which kept Liverpool in the title race picture.

He has since departed the club, but some similar heroics would be more than welcome on this occasion!

7. Second of four fixtures against Wolves this season

Liverpool are yet to play Wolves in the Premier League this season.

The home game in September was postponed following the death of the Queen – and could yet still be rearranged for this month – and the away game is set to take place at the beginning of February.

The FA Cup double-header means that the two sides will line up against one another four times in 2022/23, and Liverpool will hope to come away from those duels with at least something to show for it.

Matheus Nunes was the man on many people’s lips in the days that followed the 2-2 draw at Anfield.

He was heavily tipped to join the Reds in the summer, and those stories were reignited in the wake of Liverpool’s poor showing in the first fixture.

In more recent days, (some dubious) reports have circulated linking Ruben Neves with a move to Merseyside.

With Liverpool’s midfield still a huge topic of conversation for a number of reasons, there will no doubt be eyes on either or both of those players should they feature for Julen Lopetegui’s side.

Wolves are expected to welcome Diego Costa back to fitness in time, but Pedro Neto, Sasa Kalajdzic, Boubacar Traore and Chiquinho are all out.

9. Beware of the wounded animal

It is safe to say that the contentious decision to rule out what would have been a late Toti Gomes winner at Anfield angered Wolves.

The club sent unseen camera footage to referee chief Howard Webb that they felt demonstrated that the goal should have stood.

It could well add extra fuel to the Wolves‘ fire in the return fixture, given that they briefly thought they’d nicked the game in the dying moments and have since obtained evidence to suggest that they may have been wronged.

Liverpool will have to be alert to ensure that the additional motivation is not enough to take them into the hat for the fourth round.

Andre Marriner will be referee this time around.

If you can’t catch the live coverage you can follow every kick with This Is Anfield’s live blog, which will feature all of the updates you need and be available at 7pm.