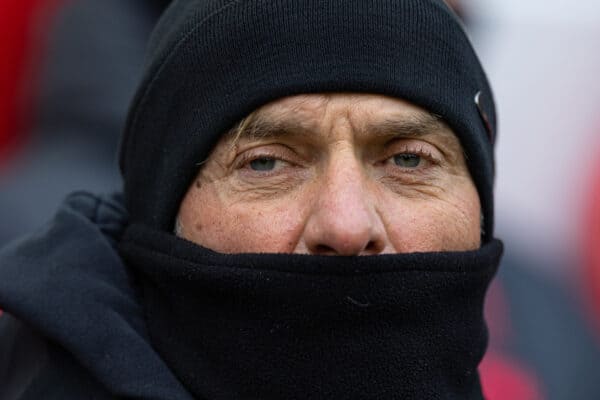 Liverpool are now at the halfway point of their Premier League season, but you’d be excused for thinking we’re a lot deeper into 2022/23 than that.

Nineteen league games have come and gone and calling it a rollercoaster feels like an understatement considering the expectations that preceded the first whistle at Fulham.

Jurgen Klopp‘s side are a shadow of their former selves, more than 18 points off the pace after 19 games, and so the focus has shifted to finishing in the top four.

For some that will feel optimistic at best, but there are still 57 points there for the taking and the Reds’ season is salvageable if they start finding form. Pronto.

We don’t have to tell you that the Reds’ record is down from last season, but just where does it sit in comparison to Klopp’s previous campaigns at the helm?

This season vs. last 7

Liverpool’s average point tally after 19 games is 41.7 since 2015/16, and as we all know, the Reds are not close to average this time around.

The Reds have amassed 29 points in the first half of this campaign, 12.7 short of the average over the last seven seasons. The downturn has been swift.

It’s a new low under Klopp, one point worse off than when he took the helm after matchday eight in October 2015.

In fact, the last time Liverpool failed to surpass 30 points after 19 games was in 2014/15 when Brendan Rodgers secured just 28.

If the same is repeated in next 19?

If Liverpool were to replicate their form in the first half of the season until May, where would that leave them?

Klopp’s side have dropped points more often than they have not, losing six times and drawing five to see 28 points go begging.

If the same trajectory is followed in the second half of the campaign, Liverpool would end the season on 58 points – a whopping 34 points less than last season.

It is a tally that would’ve guaranteed any form of European football twice in the last four Premier League campaigns.

It leaves Klopp and his side with plenty of work to do if they are to outdo their first half-of-the-season performance and more than double their points tally by May.

It’s safe to say there’s plenty of scope for improvement to add this season to that list, but Liverpool are going to have to find form with haste.