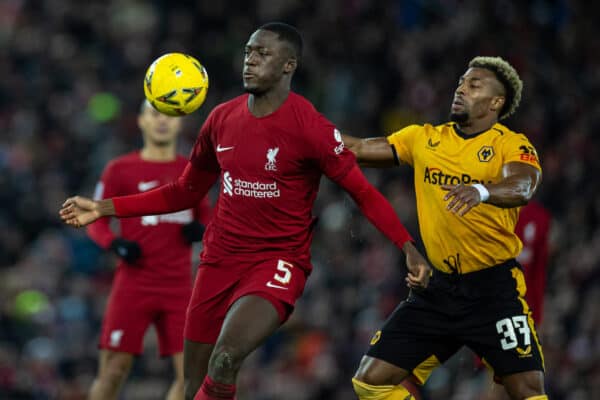 It was another concerning night for Liverpool in their 2-2 draw at home to Wolves, with those watching from the media knowing something has to change, and quick.

Jurgen Klopp‘s side were resounding favourites to progress to the FA Cup fourth round on Saturday, but they produced another insipid display.

Darwin Nunez and Mohamed Salah scored for Liverpool, but they never deserved to win the game and were arguably saved by VAR in the end.

Here’s how the media assessed the Reds’ latest show of ineptitude.

Liverpool lacking in quality and intensity yet again…

“Another week, another midfield nightmare for Liverpool. Having taken flak for his selection at Brentford, Klopp went with his ‘best’ three for this game, with captain Jordan Henderson back after concussion, alongside Fabinho and Thiago.

“None of them played well, all of them looking lethargic and a step or two off the pace. Liverpool’s second-ball game was dreadful, with Wolves constantly able to get their heads up and play through the Reds’ shape.

“Only when Naby Keita came on did the Reds even threaten to win the ball back high up the field, and even the Guinea international made too many mistakes in possession.

“Whatever Klopp and his staff are working on at Kirkby, simply isn’t working. This is a broken team at the moment, one that any opponent would fancy its chances against.”

Richard Jolly of the Independent was perplexed by the Reds’ display against a weakened Wolves side:

“If Jurgen Klopp had his way, third-round replays in the FA Cup would be scrapped. Instead, Liverpool face a second game with Wolverhampton Wanderers after failing to beat the second-string side of a relegation-threatened club.

“Even that may rank as a relief.

“This was another fraught day for Liverpool, who lacked control and conviction.

“For Gakpo, it was an early illustration that they tend to make sloppy starts and invariably go behind, and they duly trailed for the 14th time in 27 matches this season.”

Taking to Twitter, David Lynch was concerned that this season could get “ugly”:

Liverpool really very poor again tonight, as they have been since a World Cup break in which none of their issues were fixed. This season could start to get seriously ugly because things are starting to spiral now confidence has gone.

Chris Bascombe of the Telegraph was scathing of the performance, admitting that this is a shadow of last season’s team:

“The Liverpool of last season remain a flickering memory to Jurgen Klopp.

“Their grip on the FA Cup is just about intact, but Wolverhampton Wanderers are the latest to demonstrate how much work must be done at Anfield to restore this flailing team’s lustre.

“This was another ramshackle Liverpool display, full of defensive calamities in which Klopp had to thank the officials for a generous decision to deny Tote Gomes the winning goal.”

There were at least a few crumbs of comfort…

Colin Millar of the Mirror compared Nunez favourably to some past Liverool attacking greats:

“Darwin Nunez has been the subject of no shortage of questions and concern over his finishing this season. Liverpool’s record signing has passed up no shortage of opportunities after getting himself into strong positions.

“The Uruguayan produced a composed finish, albeit off his shin, from Trent Alexander-Arnold’s wonderfully flighted delivery to level the score just before the break.

“That means he now has double figures for the club with an impressive 10 goals in his opening 23 appearances.

“By comparison, that is more than Luis Suarez and Sadio Mane (both nine goals) had in the same period, although short of the 15 of Fernando Torres and Mohamed Salah’s 18 in that timeframe.”

“Doak’s cameo one of the few positives. Impresses me every time I see him play. Fearless.”

Jones echoed that sentiment, saying the Scot could feature more this month:

“Five minutes plus stoppage time. That was all it took for Liverpool’s 17-year-old Scot to do what so many of his vaunted team-mates couldn’t, and show a little bit of purpose and bravery.

“Doak is a real talent, good enough to play first-team football at Celtic last season, and on this evidence he’s worth a place in Klopp’s squad.

“The manner in which he ran at players, and how he put himself about more importantly, did not go unnoticed among the home fans.

“While so many in red look crippled by fear, the teenager brought a freshness and an energy that was most welcome. Even if he can only do a short burst off the bench at this stage, he could come in very handy in the coming weeks.”

But Liverpool must drastically improve…

Pearce hinted that a change of formation could be needed by Klopp:

“There’s certainly an argument to go back to that 4-4-2 from earlier in the season. Can’t be less secure or more open than recent games.”

And Jolly wasn’t exactly confident looking ahead to the replay at Molineux:

“They have already knocked Liverpool out of the FA Cup twice in Klopp’s reign. They may yet complete a hat-trick.

“And as Liverpool had named their strongest available side and Wolves had prioritised a Carabao Cup tie against Nottingham Forest with their selection, a haphazard draw was another indication of how standards have fallen this season.

“And so they head for the kind of game Klopp wants struck from the fixture list, knowing they could be out already.”