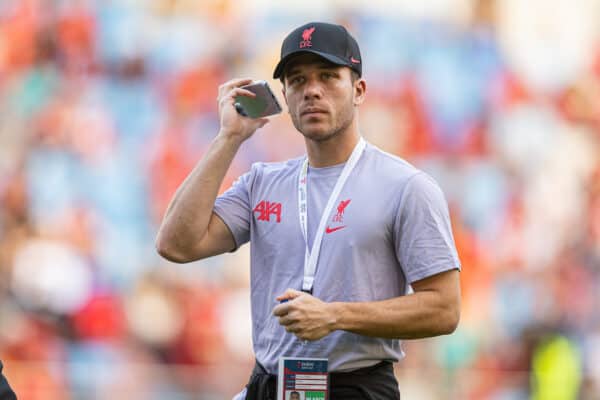 Though there is no exit clause in Arthur‘s loan deal at Liverpool, interest from Brazil could now see Juventus end his time at Anfield early.

Arthur joined the Reds at the end of the summer transfer window, but has spent much of his time on Merseyside recovering from a long-term thigh injury.

The issue, picked up while building up fitness with extra sessions during the international break, required surgery, which has seen him ruled out for over three months now.

A total of 13 minutes on the pitch so far has led to questions over whether Liverpool could cut short his loan in January and pursue a new midfield target.

But no clause was negotiated into their agreement with Juventus that would allow the club to terminate the deal mid-season.

That led to the belief that Arthur would remain at Anfield for the remainder of the campaign, as confirmed by his agent, Federico Pastorello, in an interview in December.

However, Brazilian journalist Felippe Facincani has now claimed that the 26-year-old could in fact leave as Palmeiras consider a permanent move.

Speaking on his YouTube channel, Facincani explained that Arthur‘s representatives are working on a return to Brazil, though a Janaury deal would be “very complicated.”

That is due to the player’s high wages at Juventus, along with the Italian club’s desire to keep him in Europe.

Palmeiras are said to have “dreamed” of signing Arthur, though they are also weighing up alternatives ahead of the 2023 season, which begins in April.

A switch to the Brazilian champions may be more likely in the summer, but Wout Weghorst’s recent move to Man United shows that such a transfer is possible.

Weghorst joined Besiktas on a season-long loan in July, only to then switch clubs earlier this month as United reached an agreement with both parent club Burnley and the Turkish side to bring him in as replacement for Cristiano Ronaldo.

The difficulty in replicating this with Arthur is that Palmeiras are unlikely to have the funds that United did, while a move at the end of the English season may only see him miss six weeks of league games in Brazil.

Nevertheless, it is a scenario that is worth keeping an eye on, particularly as it may suit Liverpool if they are exploring the possibility of a midfield signing this month.

At present Arthur is taking up a non-homegrown slot in squads for the Premier League and Champions League, and any mid-season departure would free up space for another such arrival.