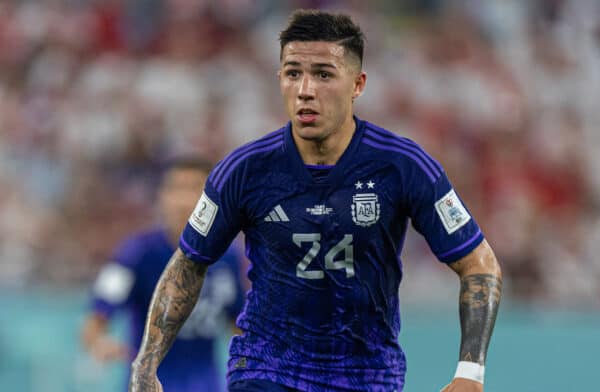 Though Enzo Fernandez is expected to join Chelsea, Benfica manager Roger Schmidt has accused the club of “disrespectful” bids for the midfielder.

Fernandez emerged as a popular name among Liverpool fans amid speculation over a move to Anfield, but links with the World Cup winner have now gone quiet.

Instead, the Benfica midfielder is expected to eventually join Chelsea, with reports that the 21-year-old has now resolved to join the London club.

But while Benfica have maintained that Fernandez would not leave this month unless his release clause of around £106 million is met, there have instead been attempts to work around this.

Chelsea are claimed to have presented a package worth over £106 million in order to avoid paying the full fee up front, while there have even been rumours of Hakim Ziyech and loans for David Datro Fofana and Andrey Santos also being offered.

This, along with what appears to be convincing Fernandez to make the move without being given consent to speak to the player, have been met with fury at Benfica.

“There’s a club who want our player. They know we don’t want to sell the player,” Schmidt told a press conference on Thursday.

“They tried to get the player on their side and they know that they only can get this player when they pay the clause.

“So it’s a very clear situation.

“What the club who want to buy Enzo is doing is disrespectful. Against all of us, against Benfica, and I cannot accept what they are doing.

“So to make a player crazy and then to pretend they can pay the clause, and later they want to negotiate, I think it’s not what I understand about a good relationship between clubs who maybe want to discuss about a player.

“That’s what I can say about the whole topic with Enzo, and I will not answer further questions.”

How does this involve Liverpool?

In reality, it doesn’t, but the situation does highlight why Liverpool may have been warned off any pursuit of Fernandez despite holding an interest.

Having only made the move from River Plate to Benfica last summer, Fernandez agreed a five-year contract with a release clause that allows the Portuguese club to protect his value.

They may not have predicted his rapid rise, which includes winning the Young Player of the Tournament award at the World Cup, but there is certainly precedent for this buy low, sell high approach.

Liverpool are seemingly banking on a deal for Jude Bellingham next summer, and while it may have been financially feasible to sign both, it was never likely that they would also bring in Fernandez.

The club are clearly trying to distance themselves from any messy negotiations, which could have been the case with Fernandez.