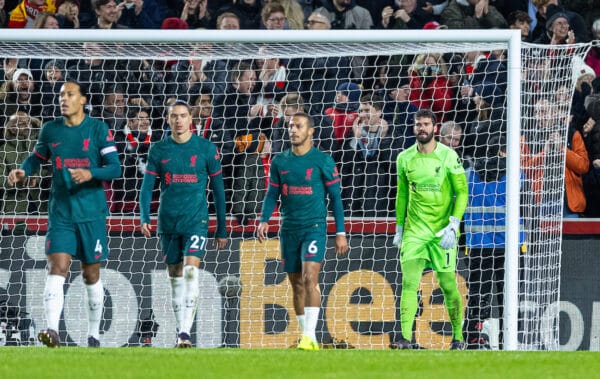 Brentford 3-1 Liverpool: Awful defending makes for a not so happy new year

Team news brought confirmation that Cody Gakpo‘s paperwork didn’t go through in time, so no debut yet for the new signing.

It also saw three changes to the team that beat Leicester three days ago, with Andy Robertson (dead leg), Jordan Henderson (concussion) and Joel Matip making way for Kostas Tsimikas, Fabinho (back from the birth of his son), and Ibrahima Konate – making his first appearance since the World Cup.

Liverpool actually started brightly but went on to concede three times off corners, two of which were ruled out for offside, in the first half with some genuinely embarrassing defending on show from the away side.

Some superb link play between Mo Salah and Darwin Nunez saw the Egyptian play in the Uruguayan in the eighth minute, but somehow his shot was cleared on the line. Nunez had done it all right but his poor luck in front of goal continued.

Brentford boss Thomas Frank had highlighted Liverpool’s high defensive line in his pre-match interview and Bryan Mbeumo got in behind just before the 20-minute mark.

That run, which saw Virgil van Dijk initially outpaced, forced a corner from which the home side went ahead as the ball went in off Konate for an own goal.

It meant another game without a cleansheet and yet another going behind first; 13 of 26 games this season.

It was a goal that reminded you of this encounter last season, which ended 3-3. And again it was another very open game.

It should have been 1-1 when Oxlade-Chamberlain played a backheel pass for Tsimikas but the left-back’s finishing was poor and easily saved.

But it could’ve been 2-0 soon after too when Brentford scored another scruffy goal off a corner that Liverpool failed to deal with, but thankfully there was an offside.

Another corner, this time in the 39th minute, and another goal for the home side which was eventually ruled out for offside as Yoane Wissa’s shot hit Ben Mee.

Liverpool got lucky, their defending from corners being absolutely abject.

Within seconds, it was indeed 2-0. This time Wissa headed in at the back post and Alisson couldn’t quite claw it away before it crossed the line. Shambolic defending.

Klopp made three changes at half time, including Virgil van Dijk being removed.

Liverpool thought they had a goal back within two minutes of the restart, but Nunez’s clinical finish was ruled out for offside.

The Reds had clearly been given a half-time rollicking and it was 2-1 when Oxlade-Chamberlain headed in from Alexander-Arnold’s cross in the 50th minute.

Liverpool’s game had an intensity that was badly lacking in the first half.

There was a good chance for Nunez on the 70th minute, but the Uruguayan’s shot was erratic and sailed wide. He certainly gets good chances, but his finishing lacks composure.

Any chance of a comeback was ended in the 84th minute when Bryan Mbuemo bundled Konate to the floor and finished past Alisson for 3-1. Liverpool wanted a foul but none was forthcoming.

Two goals conceded off corners and another off a long ball in behind a high defensive line. Liverpool’s weaknesses are hardly difficult to decipher.

A miserable start to the year.