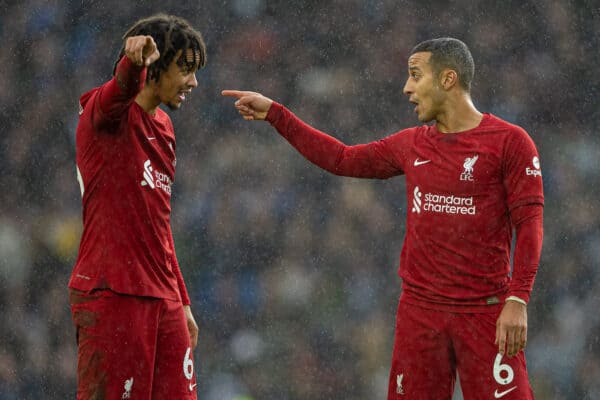 Liverpool are in a bad, bad place. Comprehensively outplayed – and quite easily for Brighton to do so against players that looked like they were running in slow motion.

Here’s our Liverpool player ratings from a truly horrific showing individually and collectively at Brighton.

It’s a sad sight, Alisson on his haunches after conceding an avoidable goal, but it’s becoming a regular occurrence.

The goalkeeper produced some routine stops, but was beaten three times as he struggled to marshal a back line that was, to put it nicely, all over the place.

At one point in the second half, Alexander-Arnold found himself caught off balance as he attempted a block tackle, and when Kauro Mitoma sauntered past him he made little effort to track back.

Too often out of position defensively and too soft in the challenge, his only redeeming quality came with a handful of trademark crosses, one of which almost set Cody Gakpo up for a debut goal.

What, exactly, happened to Matip in the buildup is unclear, but he seemed so off it from the start that there must be some kind of explanation.

The space behind him throughout an abysmal 68-minute display allowed Brighton their avenue to victory.

Ibrahima Konate – 6 (Man of the Match)

It seems in poor taste to single out a Man of the Match after that performance, but Konate was head and shoulders above every other player – and particularly his fellow defenders.

Unfortunately, Matip’s horrorshow gave him too much to do throughout, while Joe Gomez‘s introduction did little to help.

A willing runner and a player who at least tried defensively, but Robertson was far from his best.

He finished the game behind only Konate (five) in terms of tackles completed (three), though, and looked to get Liverpool up the pitch whenever possible.

Lost count of the number of ‘trademark’ hoofed balls over the top he made.

Gave the ball away time and again – only once this season has be recorded a lower passing accuracy (76.3%) – and produced absolutely nothing positive.

A nightmare season and another nightmare match for Fabinho. He looks absolutely goosed. Subbed with half an hour to go. How we needed to have signed somebody to rotate with him a long time ago.

Twenty-nine years old but looks like a midfielder who has played far too much football.

Hard to believe he was regarded as the best player in the world a year or so ago. Looks a shadow of his former self, just like the rest of this team.

With the rare chance he did have, he didn’t look remotely likely to take it.

Suprisingly given a role as the No. 10, this was an absolutely terrible decision from the manager which failed badly.

Moving the Spaniard, the only player capable of creating anything from midfield, into the attack only made things worse.

Looked exhausted late on. No wonder, he’s been playing in midfield for the last three weeks on his own.

Missed arguably the best chance when Trent’s cross put him with a header five yards out.

Clearly a player who isn’t good enough for a team of Liverpool’s ambitions, yet they’ve allowed him to run his contract down and will leave for free.

Making his Premier League debut in this team at the moment. He must be wondering what on earth he has actually walked into.

Had just 11 touches in the whole of the first half, but did manage the first shot of any note just after 20 minutes.

Can’t be blamed for this, he’s arrived into an absolute shitshow.

Joe Gomez (on for Matip, 68′) – 4 – Looked to put his weight about, but was embarrassed for Brighton‘s third.

Naby Keita (on for Fabinho, 68′) – 5 – A midfielder who should really be starting at this rate.

Harvey Elliott (on for Henderson, 68′) – 5 – Tried to make things happen but got lost in the shuffle. Not entirely sure what he does contribute?

Ben Doak (on for Oxlade-Chamberlain, 68′) – 5 – Lot of endeavour in an unfamiliar role on the left for the 17-year-old, but not the game for him to dazzle.

Attempted to change something by going for a 4-2-3-1 shape, but that was scrapped at half-time after it was evident it wasn’t working.

The decision to play Thiago, Liverpool’s only playmaker in midfield, as the No. 10 certainly failed miserably.

Another game where there was a full week to prepare, but absolutely nothing had improved. So much for Klopp wanting more time on the training ground.

His words post-match are just as concerning, claiming he didn’t see this performance coming. Most supporters saw it coming a mile off.