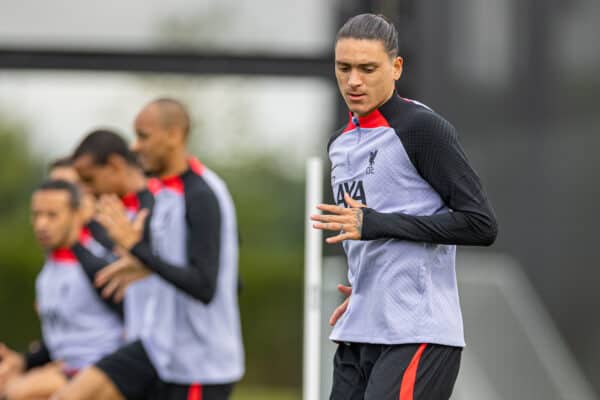 James Milner made his return to Liverpool training ahead of Saturday’s clash with Brighton, but doubts have emerged over Darwin Nunez‘s availability.

The Reds will head to Sussex this weekend to take on an upwardly mobile Brighton side, who sit just two points below them in the Premier League table.

Their trip to the Amex comes on the back of another frustrating result against Wolves in the FA Cup, and amid an ongoing injury crisis for Jurgen Klopp.

As Liverpool took to training on Thursday, two days before the game, eight players were absent due to fitness issues while there were concerns over two others.

Roberto Firmino, meanwhile, is still not back despite declaring himself fit for the Brentford game on January 2, and Stefan Bajcetic is currently sidelined with a minor injury.

Also not pictured in Liverpool’s session at the AXA Training Centre were Nunez and Curtis Jones, the latter of whom played 45 minutes for the under-21s on Saturday.

According to the Times‘ Paul Joyce, Nunez “has been absent for a number of days with an unspecified issue,” and though it is “not overly serious,” his involvement at the weekend “is in jeopardy.”

If Nunez is not fit, it would pose a big problem for Klopp as he would then be without four of his senior forwards.

Mohamed Salah has been the only ever-present this season, while Cody Gakpo trained and could make his first Premier League start on Saturday.

Alex Oxlade-Chamberlain is the most likely starter if Nunez does miss out, while Fabio Carvalho, Ben Doak and birthday boy Melkamu Frauendorf also trained.

Milner made his comeback after three weeks out with a hamstring injury, and will bolster a relatively strong midfield group.