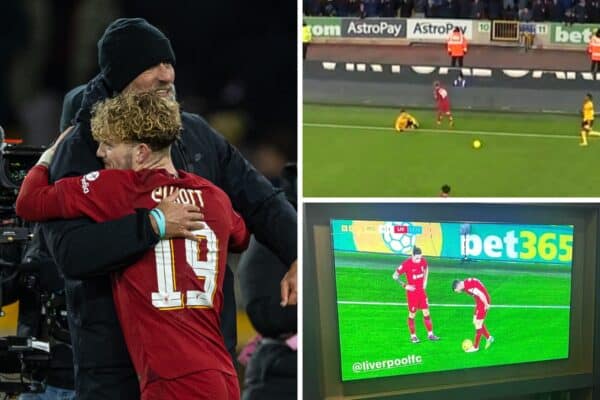 Liverpool secured a spot in the FA Cup fourth round on Tuesday, with fans noticing Jurgen Klopp‘s reaction to a big Harvey Elliott moment late on.

The Reds earned their first win in four games as Elliott’s long-range strike put Wolves down for a 1-0 victory, setting up a trip to Brighton on January 29.

It may not have been the most convincing of triumphs, but a side comprised of fringe players and academy graduates helped restore positivity among supporters.

Here are four things fans were talking about after Liverpool’s much-needed win.

Elliott may have been the match-winner with his 30-yard strike, but it was a moment in the fourth minute of stoppage time that had Klopp celebrating.

With Wolves mounting a period of sustained pressure in the closing stages, seeking a late equaliser, the teenager wiped Daniel Podence out on the touchline with a strong but fair challenge.

He got up and fist-pumped at the travelling Kop, while Klopp did similar in his technical area:

Jurgen Klopp celebrated a 93rd minute tackle from Harvey Elliott more than he did his goal. That was the performance he wanted to see, a base to build from. Ibo Konate, Joe Gomez, Stefan Bajcetic were relentless. Thiago Alcantara provided the guile

After bemoaning his side’s inability to win challenges in the previous two games, it should have been no surprise either!

Nunez and Arthur watch together

Klopp was without a host of key players for the trip to Molineux, including Darwin Nunez, who missed his second game in a row with a hamstring problem.

The striker is expected back for the visit of Chelsea on Saturday, but on Tuesday night he sat alongside the also-absent Arthur as they watched the game at home:

One thing: it’s now gone mid-January and someone still has their Christmas decorations up?!

Bajcetic puts Moutinho on his arse

It was a standout performance from 18-year-old Stefan Bajcetic at the base of the midfield, showing the composure and maturity of a player considerably older.

There are now convincing calls for him to keep his place against Chelsea at the weekend, though it will be a tougher test than Wolves in the cup.

While fans will now be reveling in highlight reels of Bajcetic’s night, though, Wolves midfielder Joao Moutinho may want to forget the moment a simple turn left him on the floor:

Considering the current situation of Liverpool's midfield, Baj?eti? should be a regular starter. Beautiful progress.pic.twitter.com/9O3cCbJ8Fe

Ragnar Klavan would be proud.

The buildup to kickoff saw sex noises in the BBC studio, which turned out to be an old mobile taped to the back of one of the pundits’ chair, and things were awry on the pitch, too.

As Adama Traore surged up the right flank in the opening minutes, the lights went out very briefly inside Molineux, with a power cut forcing the move to break down.

The lights have gone out at Molineux ??

??? Watch live on @BBCOne and @BBCiPlayer, plus get more on the @BBCSport app ??#BBCFootball #BBCFACup pic.twitter.com/4KCJTr0tkG

Not long after, it became apparent that an electrical fault also caused problems for VAR – thankfully, it wasn’t needed!