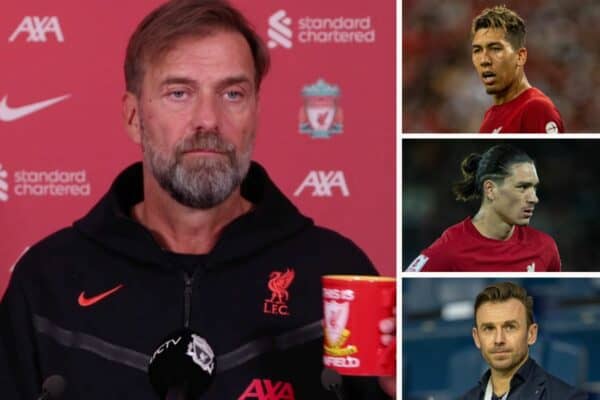 In his pre-Brighton press conference, Jurgen Klopp delivered updates on the fitness of several players, including Roberto Firmino and Darwin Nunez, and discussed the chances of the Reds signing more players this month.

Klopp has revealed that Firmino is “not close” to a return to training, with the Brazilian initially only expected to be sidelined for 10 days to two weeks.

Nunez is also an injury doubt for the trip to Brighton, but James Milner and Stefan Bajcetic have returned to fitness.

“In the first moment it was like a little injury, estimated 10 days – two weeks,” Klopp said on Firmino.

“He did the normal rehab stuff, all the experts told us what we could do, then Bobby felt again, something. That kept him out for longer.

“I don’t know exactly when he will be back, he’s not close to team training.”

“We are waiting for information,” he said on Nunez.

“It’s not a major one but it still kept him out of training. We have to wait for that.”

Liverpool fans hoping for more signings this month look set to be disappointed.

“I don’t think so, it’s just the situation,” Klopp said when asked if there was likely to be more additions in January.

“My job is to use the boys we have and I have no problem, I like the teams we line up with.

“You cannot sort all problems in the transfer window. In a dream land you would just buy players now but I don’t see that coming.”

Klopp was not happy when he was asked to elaborate on why Liverpool “could not solve all of their problems in the transfer market.”

“I have to tell you the money story again, really?” Klopp said.

“Why do you ask a question when the answer lies on the table? I really don’t understand that.

“In the moment, four of our six offensive players are injured. If we buy another one, the others will come back, and we’d have seven strikers then.

“We couldn’t even put them on the Champions League list. It’s just not that easy.

“You cannot sort the problems, especially injuries, in the transfer window.”

Klopp had plenty of nice things to say about this weekend’s opponents, a side he believes has developed under Roberto De Zerbi since the Italian took charge of his first game against the Reds in November.

His compliments included one regarding their shrewd transfer business..

“Their connections to South America are obviously pretty good – maybe in the future Chelsea will have those!”