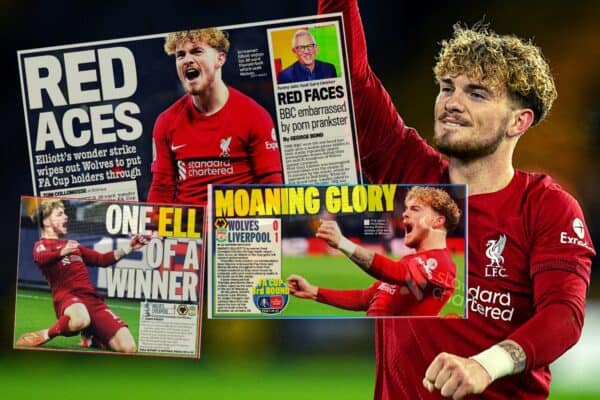 There was actual positivity from the media after Liverpool’s 1-0 victory away to Wolves, as signs of the old Reds re-emerged.

Jurgen Klopp‘s side battled their way into the FA Cup fourth round on Tuesday evening, thanks to Harvey Elliott‘s 30-yard screamer.

It was a more energetic showing from Liverpool, as Klopp made eight changes, and they were more than worthy winners at Molineux.

Here’s how the media assessed the Reds’ pleasing triumph.

At last, there was some positivity after the game…

Andy Hunter of the Guardian enjoyed the reaction from the Reds after some dreadful form:

“Jurgen Klopp received the reaction he demanded and the reward he craved.

“Liverpool will make a quick return to Brighton, scene of Saturday’s humbling in the Premier League, after holding off a determined yet toothless Wolves to secure a fourth round visit to the Amex Stadium.

“Liverpool performed with renewed confidence after the breakthrough. Thiago’s influence increased with Bajcetic, Fabio Carvalho and Elliott providing energy and options around him.”

Richard Jolly of the Independent said it was Liverpool’s best display of the year so far:

“After the worst performance Jurgen Klopp could remember came Liverpool’s best of 2023.

“They had set the bar so low against Brentford and Brighton, plus their previous meeting with Wolves, that it is not saying much but at least they offered a reminder of why they are the FA Cup holders.

“An imperfect display at least contained a show of spirit and they ended with bodies strewn on the pitch in their own box in exhaustion.

“Klopp had wanted a response and he got one. Liverpool’s resolve was apparent in their reserves.”

GOAL‘s Neil Jones asked if this was a turning point in Liverpool’s season:

“Was this a night to wake Liverpool from their New Year slumber? It’s been a season of struggle for the men from Anfield, but they gave themselves a much-needed confidence boost here, beating Wolves 1-0 at Molineux to secure their place in the fourth round of the FA Cup.

“The win sets up a return to Brighton, where Liverpool were well beaten in the Premier League last weekend, in the fourth round, but Klopp will have been more pleased to see his team press, chase and pass the ball like he has been demanding them to.

“He asked for a reaction after the Amex debacle, and he got one.”

On Twitter, David Lynch was another who saw glimpses of the Reds of old:

Liverpool looked so much more like a Jurgen Klopp team tonight despite eight changes – the pressing and defensive structure a huge improvement on recent weeks. Some big selection calls coming up if the manager wants to see this brand of football in the Premier League games ahead.

This Is Anfield‘s Mark Delgado hinted at changes taking place against Chelsea on Saturday, as Klopp’s men look to kick on:

“The Reds play Chelsea at the weekend – a huge game at any point, but more so given the utterly abject form of both clubs right now.

“Klopp’s big decision will be how much to stick and twist: how many times can he be let down by familiar faces before going in search of something new, something more exciting, something with long-term potential?

“A few are naturally going to start regardless of anything that happened here – Alisson, Mohamed Salah, Darwin Nunez if he’s fit – but for the positions which are closer between potential starters, the hope must be Klopp lays down a marker to those who have disappointed.

“Chelsea have plenty of their own problems and Liverpool have to make the most of that, get back to winning ways in the league and, step by step, try to recover the season which has been a total bust so far.”

The Mirror‘s Tom Victor hailed the impact of match-winner Elliott:

“Before the game, Wolves announced the signing of Pablo Sarabia from Paris Saint-Germain, but it was one of Liverpool’s front three who caught the eye early on.

“Harvey Elliott hasn’t always been used in an advanced role by Klopp, but that’s what happened at Molineux with Mohamed Salah rested and Darwin Nunez, Roberto Firmino, Diogo Jota and Luis Diaz all unavailable.

“The goal was Elliott’s fourth of the season, with three of those coming away from Anfield. It has a strong case for being his best in Liverpool red as well, and helped light up a first half which had been literally plunged into darkness with an early floodlight issue.”

Jolly was full of praise for several:

“Liverpool benefited from some effortlessly perceptive passing from the 18-year-old Stefan Bajcetic at the base of the midfield. He started superbly, offering evidence of his precocity.

“At the other end of the age spectrum, James Milner played his first game as a 37-year-old. The stand-in right-back was tested by the verve of Rayan Ait-Nouri but was characteristically dogged.

“Naby Keita offered energy on a belated first start of an injury-hit season. In defence, Joe Gomez and Konate, who have both endured awkward outings since the World Cup, fared better amid their defiance.”

Jones loved what he saw from the classy Stefan Bajcetic:

“Right then, the cat is well and truly out the bag. Liverpool have a hell of a prospect on their hands here. At 18, Bajcetic looks like he can save the club a headache, and a hell of a lot of money too.

“It was no surprise that Klopp opted to reshuffle his midfield after the disaster-class at Brighton, but to put his faith in a teenager making only his third professional start shows just how desperate the situation has become, and just how highly-rated the young Spaniard is.

“Bajcetic delivered, producing the kind of display that turns heads. He presses like a seasoned professional, he reads the game superbly, and his composure in possession marks him out as a very special talent.

“Whether he’ll start against Chelsea in the Premier League on Saturday remains to be seen – he suffered with cramp in the second half here – but one thing is for sure; this kid has got a big future ahead of him.”

Liverpool legend Jamie Carragher couldn’t hide his admiration for Bajcetic either, taking to Twitter to hail the teenager: