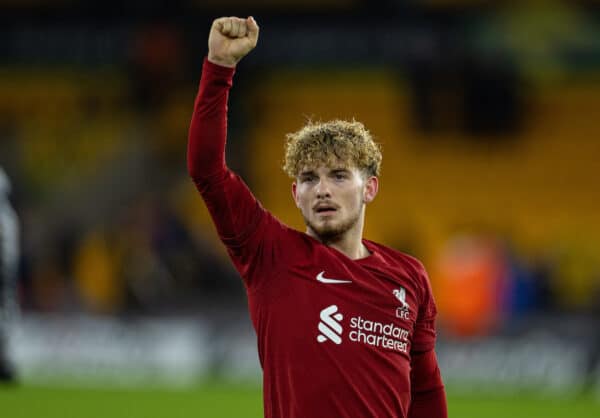 Liverpool fans had moaned and made plenty of noise in the lead up to this game, but the Reds continued the defence of their FA Cup title by coming through a tough tie with Wolves.

Given recent results, there was an obvious element of tension in the air pre-game for Reds fans, though it’s worth pointing out they got an early release thanks to Harvey Elliott‘s screamer.

Before that though, Jurgen Klopp‘s habit of switching it up for the cup was on show, with eight changes able to be taken as a sign of rotation due to fatigue – or opportunities for others after a truly awful weekend showing.

Goalkeeper, both full-backs, the spine of the team and the flanks all showed alterations, a mix of fringe players and youth into the lineup.

Joe Gomez can perhaps feel he did enough to earn another go as Ibrahima Konate‘s partner, while Elliott might hope his impact does the same higher upfield.

As for most of the rest, while we witnessed some nice touches or instances of effort, was there really enough on show to suggest they could be the answer to our needs?

Then again, perhaps attitude alone is improvement enough after the most recent debacles.

Come full-time, relief was very much apparent after the Reds were made to sweat.

We finally saw a tackle

Some call it the dark arts. Some call it cheating, or conning the ref, or in the modern vernacular, being a sh*thouse.

What we can all term it in terms of Liverpool is ‘necessary’ after recent performances, and it was much more prevalent and visible this time out.

Chief protagonist in this regard was James Milner – no surprise there – but it wasn’t only our stand-in skipper who was absolutely filthy when he needed to be.

Fellow full-back Kostas Tsimikas had no issue doing the dirty work, while Thiago was naughty more than once, earning himself a yellow card around the hour mark.

Gomez, Stefan Bajcetic and Fabinho, once he came on, all got involved too.

Regardless of who it was, the plan was both obvious and effective: stop the hosts enjoying buildup play, stop them countering our soft centre and stop them creating any opportunities in the first place, which we’ve been so poor at preventing going in of late.

This might not be the most sexy or enticing part of the game, but it has been woefully, dismally absent in recent matches and made a welcome return at Molineux.

Matheus Nunes has frequently been linked as that potential next addition, with rumours of a deal already agreed that we’ll bid in summer – a year after he joined Wolves.

Here, he entered at the break to give his current side some much-needed penetration from deep and an extra body in the areas which matter most, and while he failed to finish when given the chance, he still had an impact.

More than once he went for the early ball in areas which could hurt the Reds, sparking transitions and always on the lookout for movement ahead of him.

Thankfully, from our perspective, that was far too often missing.

There’s nothing wrong with slow buildup if you know what you’re doing, of course, but here it felt forced, awkward and hesitant from our hosts until Nunes got involved in the play.

Wolves are better with him in, of that there’s no doubt, but is he a fit for the Reds?

It’s very tough to compare, given the options and movement he’d have if a full Klopp front line was waiting for his service.

Was it good for you?

Result aside, a lot of fans would have simply been wanting to witness a performance here.

Brighton, Brentford and too many other displays have been completely lacking in quality, intensity or at times even a willingness to try hard – unforgivable, to be frank.

So was this a good night’s work?

In some aspects, it was definitely improved. Konate and Gomez were solid with their defensive work; Thiago put in a shift and Elliott did everything asked of him.

Naby Keita also displayed the type of diligence needed in his role, without being close to spectacular.

At the same time, there’s no denying this was a hard watch.

It was more about organisation and perspiration rather than invention and inspiration, as we edged ourselves to a long-overdue clean sheet – as opposed to the big mess we’ve seen of late.

As such, we perhaps leave satisfied, but not exactly impressed.

Move on, or back to the ones who hurt you?

The Reds play Chelsea at the weekend – a huge game at any point, but more so given the utterly abject form of both clubs right now.

Klopp’s big decision will be how much to stick and twist: how many times can he be let down by familiar faces before going in search of something new, something more exciting, something with long-term potential?

A few are naturally going to start regardless of anything that happened here – Alisson, Mohamed Salah, Darwin Nunez if he’s fit – but for the positions which are closer between potential starters, the hope must be Klopp lays down a marker to those who have disappointed.

Chelsea have plenty of their own problems and Liverpool have to make the most of that, get back to winning ways in the league and, step by step, try to recover the season which has been a total bust so far.

This match, this result, had to be about making enough noise to show we’re on the path to enjoying ourselves once again.

Perhaps we didn’t achieve that in tremendously graphic fashion, but when desperation takes over, nobody should be embarrassed to admit that they’ll take whatever is on offer from time to time.

Tonight Liverpool got what they wanted. It’s back to winning ways, even if the finish was more nervous than we’re used to it being.