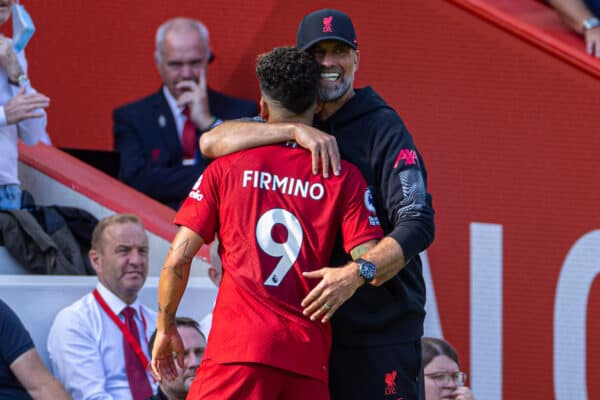 Roberto Firmino has been clear in his preference to sign a new contract with Liverpool, but with a new deal yet to be agreed, Jurgen Klopp was quizzed on the Brazilian’s future on Friday.

The Reds striker is currently sidelined with an injury, with Klopp revealing last week that Firmino was “not close” to a return to action.

Before his injury, in a season where Liverpool have struggled to find any kind of consistency, Firmino was one of their standout performers, with nine goals to his name in 2022/23 so far.

Speaking ahead of his side’s Premier League meeting with Chelsea on Saturday, Klopp was asked what was holding up an agreement on a new contract for Firmino.

“The normal things, what could be the reason from your point of view?” he asked the reporter.

When it was then put to him that there could be a hold up from the player’s end, or that Liverpool may yet to have put a new deal on the table, Klopp wasn’t keen to elaborate.

“That’s a little bit too detailed, that information,” he continued.

“It’s completely normal. Bobby knows about the situation here and what we think of him, that’s clear. Nothing else to say.

“There’s no problem, or whatever, it’s just the situation. I can’t see any kind of problems in that.”

However, in the second part of his answer, Klopp did admit that the possibility remains that other clubs could offer Firmino “something better.”

The Reds’ No.9 has been tentatively linked with a big-money move to the Middle East, where he would certainly earn more money than Liverpool will be offering.

And despite Firmino going on record in saying he wants to stay, with no agreement in place, Klopp is clearly aware that all scenarios remain on the table.

“In the first part of the season we were not flying, but Bobby was maybe the only one who played a kind of normal season in a lot of games,” Klopp added.

“He’s really important. His link up play, all these kind of things. The way we want to play, maybe he would not fit to all clubs in the world, but to most, definitely. Because in tight areas, having a technical player with his football intelligence, who can develop the game from there and score on top of that, who is unselfish, you don’t get that very often.

“Great player, and I don’t know one thousand percent what his plans are, maybe somebody else will offer him something better, I don’t know, that can all happen.

“But you asked me if I want him to stay. Yes, and everything is as it should be at this moment in time.

“We’re pretty early, the transfer window is not even closed, and we will see.”