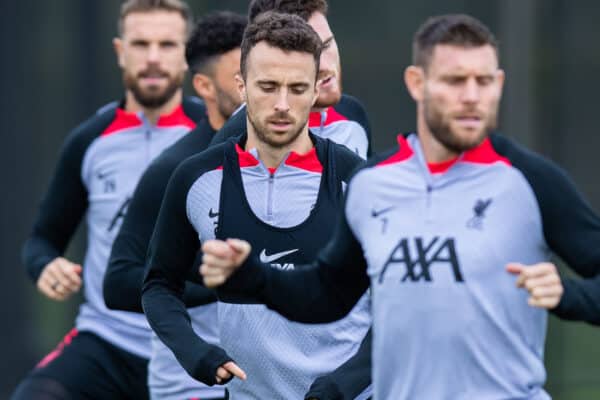 Jurgen Klopp has provided a welcome update on Diogo Jota‘s recovery from a calf injury, with the manager confirming when he should return to action.

It has now been three months since Jota’s last appearance for Liverpool, having suffered a serious injury in the closing stages of October’s 1-0 win over Man City.

His prolonged absence has come amid another crisis season for Klopp’s side, who are also currently without Luis Diaz, Roberto Firmino and Darwin Nunez from their attacking ranks.

While his return is not imminent, Jota is expected to be back in contention in “another few weeks,” as Klopp told reporters on Monday.

“I don’t know exactly how long,” the manager said.

“He looks really good, he’s out there on the pitch. He’s doing a lot of stuff already.”

Asked whether the Champions League last-16 tie against Real Madrid on February 21 could be a realistic target, Klopp replied: “From my point of view, yes. But I don’t know. Yes.”

There could be a concern that, having likely missed over four months when he finally rejoins his team-mates on matchdays, Jota could take time to get back up to speed.

Put to him that it may not even be until next season that the Portuguese will be at his best again, Klopp looked baffled.

“No, because Diogo is extremely football-smart,” he explained.

While it is still a while away, having Jota back fit and available would be a big boost to Liverpool, who should have Nunez back in time for the visit of Chelsea on Saturday.

Meanwhile, Diaz has shared a positive update on his recovery programme at the AXA Training Centre, though less is known of Firmino’s layoff after a recent setback.