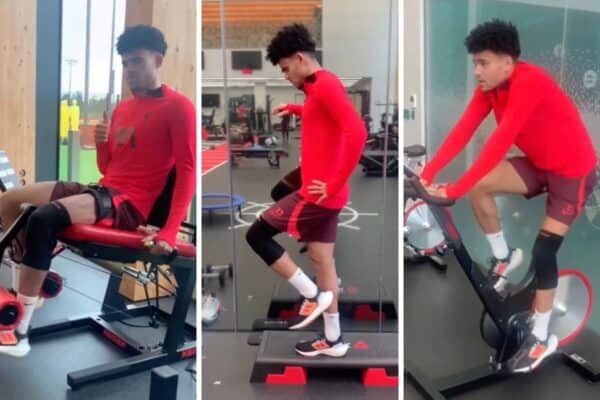 Luis Diaz is taking the next steps in his recovery from a long-term knee injury, with the winger providing an update from the AXA Training Centre.

While Diaz is not expected to return to action for another two months, he is stepping up his recovery from a second knee injury.

The No. 23 has been sidelined since October, and after making his initial comeback while Liverpool were at their mid-season training camp in Dubai, he suffered a major setback.

Reports suggested Diaz will be fit again in March, though it remains to be seen exactly when Jurgen Klopp will able to call on him again.

The latest signs from the training ground in Kirkby are positive, with the player sharing an update on his recovery work on Instagram on Monday:

Diaz can be seen undergoing a series of exercises to test his injured left knee, including high-knee movement, minimal resistance training and indoor cycling.

The approach is still, clearly, cautious, but these are the next small steps in the 26-year-old’s recovery, which will be increased in the coming weeks.

Given the second injury to the same knee in December, albeit believed to be a different ligament, Liverpool’s medical staff will be reluctant to overburden Diaz at any stage.

Whether Liverpool fans can expect to see the Colombian back involved in games in March is unclear as of now, with the priority being to preserve his long-term fitness.

But a thumbs up and a smile from the man himself can never be a bad thing.