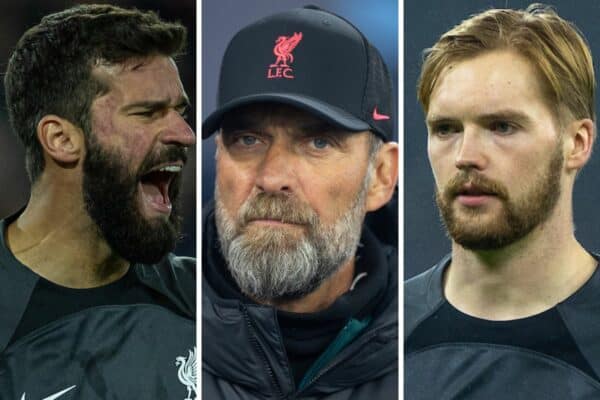 Speaking ahead of Liverpool’s clash with Wolves at Anfield on Saturday, Jurgen Klopp confirmed his first-choice goalkeeper for FA Cup matches this season.

Last season, Alisson was between the sticks for four of the Reds’ FA Cup matches, including the final, where he successfully navigated the penalty shoot out victory over Chelsea.

He missed out on the third-round tie against Shrewsbury as he continued his recovery from Covid, and was again absent for the fourth-round win over Cardiff, having only recently returned from international duty.

With Caoimhin Kelleher the Reds’ No. 1 goalkeeper for all of their Carabao Cup matches, there was some debate at the time as to whether that would also be the case in the FA Cup.

But Alisson played each of Liverpool’s games from the fifth round onwards, and when asked who would be in goal for this FA Cup campaign, Klopp said it had “always” been Alisson when available.

So with Liverpool knocked out of this season’s Carabao Cup by Man City last month, there is now a possibility that Kelleher will not play again in 2022/23, with Alisson Klopp’s first-choice goalkeeper in each of the three competitions the Reds remain in.

After that defeat against City, Kelleher refused to commit his future to Liverpool beyond the end of this season.

“Listen, I think we’ve obviously only just come back into the middle of the season, so we’ll just see what the season brings and then after that we’ll see, we’ll see what happens after that,” he told the Echo.

“But I think at the moment, for now, I just have to be focused on trying to be ready for Liverpool.”

Now 24 years of age, there could be no real arguments should Kelleher decide to leave in search of regular game time at the end of this season.

Speaking to reporters on Friday, Klopp suggested Liverpool will need a “bigger squad” in the future and “level squads internally.”

Surely, though, the goalkeeper position would be an exception, given the fact Alisson has been his first-choice option for three of the four competitions Liverpool have played in this season.

This week, Liverpool have again been linked with Hannover goalkeeper Ron-Robert Zieler, and with Kelleher and likely Adrian coming to the end of their time at Anfield, there’s every chance a new player will be recruited in that position in the summer transfer window.