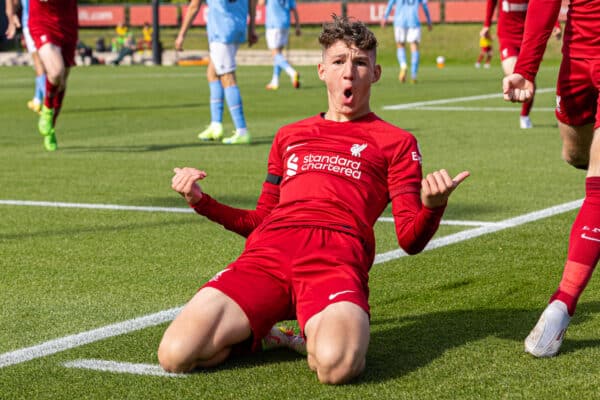 Liverpool have confirmed that academy striker Lewis Koumas, who has been in blistering form this season, has signed his first professional contract

It is only his first campaign as a striker, having previously turned out in midfield, but Koumas has already excelled in his new role.

Making the step up to the under-18s as part of an exciting new forward line with Ben Doak and Trent Kone-Doherty, the teenager hit the ground running.

Like Doak, however, that brought a swift rise up the ranks, with Koumas also called to fill in for injuries at under-21s level, which led to a start against League Two side Rochdale and a goal against Dinamo Zagreb.

Across the age groups this season, the son of former West Brom midfielder Jason Koumas has scored 11 goals and laid on four assists in 16 games.

Having turned 17 in September, the club were able to offer Koumas a professional contract, which he has now signed.

Liverpool confirmed the news on Wednesday, with the youngster expected to have put pen to paper on a three-year deal that would take him up to 2026.

That was also the case for Doak, who signed a new deal two months ago, with the maximum terms for a first-time professional being three years.

Koumas is currently sidelined with a foot injury that has kept him out as the academy season restarts, with his last appearance being the 2-0 win over Dinamo Zagreb on November 9.

No player has scored more goals in the Liverpool academy so far this campaign than Koumas, with only Doak producing more goals and assists combined.