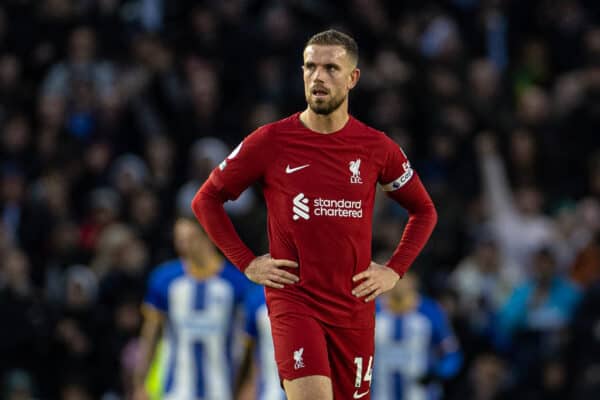 Liverpool in “big trouble” with Brighton plan “the definition of insanity”

Liverpool’s abysmal 3-0 defeat away to Brighton was deservedly slaughtered by the media, as the Reds’ problems worsen by the week.

Jurgen Klopp‘s side were incomprehensively bad at the Amex on Saturday afternoon, with a top-four finish unthinkable at this point.

Solly March fired home a quickfire double early in the second half and Danny Welbeck also scored, with Liverpool rarely looking like producing a response.

Here’s how the watching media dissected this latest dismal showing.

It really was a shocking display by Liverpool…

Jim White of the Telegraph believes the Reds are a shadow of the team they once were:

“For Liverpool it is not all bad news. If it was their chase after four trophies last season that has exhausted them this time round, at least they won’t have that problem next season.

“This defeat leaves them not just 10 points behind Manchester United in the league, but now, as they sink into mid table, two behind Brighton. And frankly, after this, noone should be surprised.

“This Liverpool side is a husk of the one that so recently was in contention for all four trophies, one outwitted, out run and out manoeuvred by an excellent Brighton side.

“The grin the home manager Roberto De Zerbi wore as he trotted down the touchline when the third goal was scored was wholly indicative.

“Even without the sulking Leandro Trossard who had scored a hat trick in the reverse fixture at Anfield, this was a stroll.”

Liverpool are as bad defensively as anyone in the Premier League right now. Fortunately they have the best keeper which means they aren’t further down the table. #BHALIV

The Mirror‘s Freddie Keighley was worried about just how predictable the outcome was:

“What was quite so concerning for Liverpool was the way they were outperformed in every department.

“The Reds were not only at sixes and sevens at the back; they were also run ragged in midfield and toothless in attack, where Levi Colwill nullified a front line containing Mohamed Salah and Cody Gakpo, who was making his Premier League debut.

“Liverpool never looked like forcing their way back into the match to set up a nervy finish and their calamitous defending was exposed yet again in the closing stages as Ibrahima Konate and Joe Gomez failed to deal with a bouncing ball and Danny Welbeck scored Brighton‘s third.

“The Reds’ chances of Champions League qualification are slipping away from them at an alarming rate, while the Seagulls can begin to harbour serious hopes of finishing in the European spots.”

The Guardian‘s John Brewin felt this was a new low for the season for Liverpool:

“After flying so high last season, Liverpool are experiencing some crashing lows. Defeat to an inspired, superb Brighton may be the lowest yet.

“This was a mournful performance from Jurgen Klopp’s team, one of submission to a team who have moved into a different gear under Roberto de Zerbi.

“That their first two goals came from Solly March, who joined the club when a League One outfit, served to remind of how far they have come.

“Moises Caicedo and Alexis Mac Allister, together in midfield for the first time since 13 November, were dominant. Mac Allister, wearing his World Cup medal, had received a pre-match standing ovation.

“Both South Americans have been lately linked with moves to Liverpool, where Klopp had opted for the midfield old guard of Jordan Henderson, Thiago and Fabinho. A previous area of great strength has become one of serious concern.”

GOAL‘s Neil Jones was another who at a loss by the ineptitude on show:

“Liverpool have now lost their first two league games of a calendar year for the first time since 1993, and look a team bereft of belief, ideas and cohesion.

“Their midfield, continually criticised throughout this campaign, was non-existent again, their defence was unable to cope under the constant pressure it was placed under, and a makeshift attack featuring new signing Cody Gakpo on his Premier League debut offered nothing by way of a goal threat.

“They are in big trouble, clearly. They could find themselves 10 points off the top four by the end of the weekend, and it would take a brave punter to back them to fight back from the position they currently find themselves in.”

Klopp deserved some criticism, as did numerous players…

The Liverpool Echo‘s Ian Doyle was baffled by Klopp’s decision-making:

“The definition of insanity? Doing the same thing over and over again and expecting different results.

“A cliche, yes, but that doesn’t make it any less accurate. Certainly not in the case of Jurgen Klopp and this increasingly-bewildered Liverpool team.

“A starting line-up showing just one alteration – and an enforced one at that – from the lucky FA Cup escape at home to Wolverhampton Wanderers was asked to quell a vibrant Brighton and Hove Albion and rekindle hopes of Champions League qualification.

“Klopp’s misguided faith was rewarded with a new low in a season that continues to underline the Champions League final defeat to Real Madrid last May now represents an ending for his squad.”

This Is Anfield‘s Mark Delgado feels it’s time for certain players to be dropped:

“It was a terrible team performance first half, no doubt. That said, three players above others were well out of sorts again.

“Oxlade-Chamberlain, short of sharpness and skipping out on more than one early challenge; Henderson, a passenger in midfield and offering nothing in either box; and Joel Matip, caught out so often by Kaoru Mitoma’s runs off the ball, Ferguson’s strength and any passes in behind him.

“It was the latter two who contrived to gift the opener between them – Matip caught on the ball, Henderson not alert or balanced enough to receive play or make a challenge – but this goal was just the latest in a string of errors from the Reds.

“Henderson, Andy Robertson, Alisson, Ibrahima Konate – they’ve all been at it in recent weeks, adding individuality to a dreadful lack of cohesion on a team level.

“It surely has to be time for the boss to admit and accept that too many are just way below the level required, right now if not for the long term, and remove them without remorse.”

Where on earth do the Reds go from here?

Doyle said that changes simply have to happen, and fast:

“Klopp admitted before the game that the inevitable physical and mental exhaustion of going for the quadruple last season was having a negative effect on his players.

“Indeed, they would perhaps probably have instead preferred scraping into the top four and an earlier exit in the Champions League if it meant avoiding what has since transpired.

“Make no mistake, this was an embarrassment. Half the season remains, but change has to come. Now. Before it is too late.”

On Twitter, David Lynch focused on the need for new signings – it feels like reinforcements or bust for Liverpool this month:

Nothing shocking about this result – Brighton are simply a better team than Liverpool. And that won’t change without further signings and players coming back from injury because Klopp just isn’t mitigating for the fact his current options can’t do what he’s asking them to.