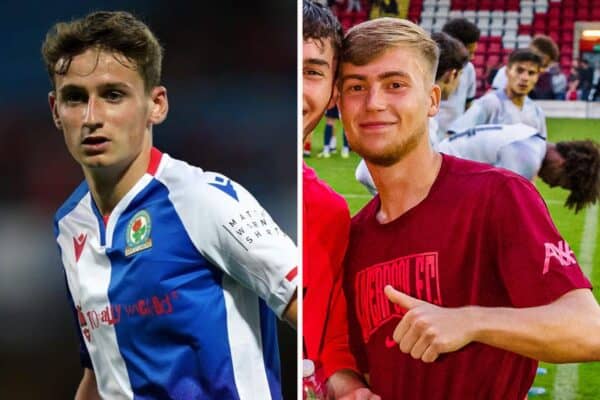 An assist, pre-assist and festive minutes were the highlights for Liverpool’s loanees over the weekend, while for one goalkeeper it marked his return to the squad after injury.

Tyler Morton has been an ever-present for Blackburn this season, a valuable learning curve that continues to see him impress from one week to the next.

It was no different in Rovers’ 1-0 win over Cardiff on New Year’s Day, with the 20-year-old providing the ‘pre-assist’ (the pass before the assist) for Bradley Dack’s winning goal to keep Blackburn in third place in the Championship.

Positioned on the halfway line, the midfielder saw the run of Ben Brereton and lofted the ball perfectly into his path on the edge of the area, paving the way for Dack’s deflected goal.

Morton was awarded a seven-out-of-ten rating from LancsLive having done well to “control the tempo in the middle of the park,” and there was plenty of positive reactions for him on social media too:

Beautiful pre-assist from Tyler Morton there for Blackburn.
He might not get another chance in the Liverpool midfield, but I do believe he's good enough for the Premier League.
His best chance may be to stay at Ewood if they go up this season.

Tyler Morton the quarterback for Blackburn today. They are using long balls over the Cardiff defence for Gallagher and Brereton Diaz. The goal came from one such play, Brereton with the lateral to Dack.

Tyler Morton just controlled that game for Blackburn, so composed in tight spaces, such an engine, a massive talent @Mkeeg25

Elsewhere, Jack Bearne was the loanee credited with the assist, his first this season, ensuring he started 2023 on a bright note for Kidderminster Harriers.

It’s the continuation of an “impressive streak” of form, so say the Kidderminster Shuttle, with Bearne’s well-timed delivery allowing Amari Morgan-Smith to finish from close range.

The Liverpool loanee had his chances to help clinch the win after Hereford pegged back the opening goal but the National League side had to settle for a 1-1 draw.

In League One, Conor Bradley closed out 2022 with another 90-minute outing for Bolton, his 17th in the league this season, in a 1-1 draw at Lincoln – while fellow Red Owen Beck watched from the bench.

Bradley wasn’t handed the luxury of space at Lincoln and couldn’t make as many trademark runs down the right wing but did attempt to cut inside to create a spark for his side.

In other news, goalkeeper Vitezslav Jaros was in a matchday squad for Stockport for the first time since mid-October after making his return from injury.

He would not see any minutes on the pitch and had to watch on as his side succumbed to a 1-0 defeat at Grimsby Town. He’ll be hopeful of his first minutes in nearly three months when Stockport host Walsall in the FA Cup on January 8.

Finally, there were also minutes for James Balagizi in Crawley Town’s 3-1 defeat at Stevenage, while Max Woltman made his 14th appearance of the season off the bench as Doncaster notched a 2-1 win.