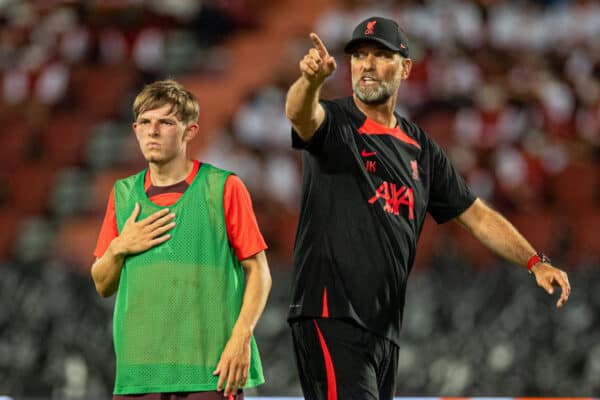 There could be a January reshuffle on the cards for Liverpool midfielder Leighton Clarkson, who is said to be attracting Championship interest.

Of the 16 players currently out on loan from Liverpool, 21-year-old Clarkson has been one of the most impressive performers.

After an aborted spell at Blackburn last season, the midfielder agreed to join Aberdeen towards the start of August – and within hours of completing his switch he had scored his first goal.

That wondergoal against St Mirren was the first of five for the Scottish club, with two assists also to his name in 19 appearances so far.

Speculation mounted over a January exit from Pittrodie, however, when Aberdeen brought in two new midfielders on loan, with the arrivals of Graeme Shinnie and Patrik Myslovic leading to claims Clarkson’s deal could be cut short.

Manager Jim Goodwin insisted that was not the case, but now reports suggest Liverpool could recall their No. 65 and send him to the Championship.

Football Insider claimed on Tuesday that West Brom, Reading and QPR were hopeful of landing a loan deal for Clarkson, who only played seven times in the second tier while at Blackburn.

And while that would typically be far from a reliable source, journalist Alan Nixon – who previously broke the news of the player’s transfer to Aberdeen – has since added that QPR are “making a strong move.”

QPR are now managed by Neil Critchley, who previously worked with Clarkson in the Liverpool academy and started him in the 1-0 FA Cup reply win over Shrewsbury in 2020.

Critchley’s connections at Kirkby would almost certainly aid any negotiations over a change of clubs for the youngster, while Liverpool would seek assurances over his game time.

Liverpool have already recalled Billy Koumetio from his failed spell at Austria Wien, while the expectation is that Jakub Ojrzynski will return from Radomiak Radom.

Marcelo Pitaluga could be officially brought back from Macclesfield when he recovers from an ankle ligament injury, with suggestions he would then be sent back on loan to a club in the Football League.