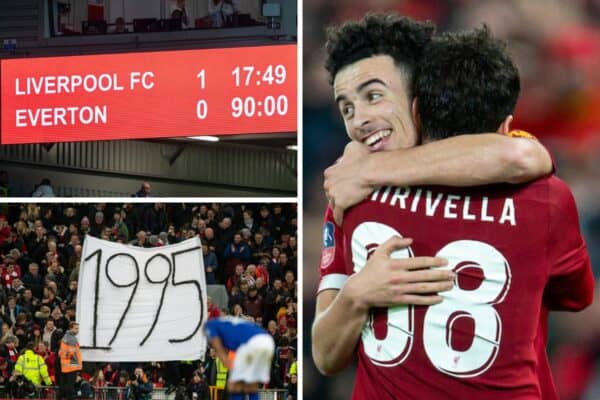 Thursday will mark three years since a brilliant strike from Curtis Jones saw a youthful Liverpool team knock Everton out of the FA Cup third-round at Anfield.

The match was played exactly two years on from the Reds’ last FA Cup encounter with Everton, a game that saw Virgil van Dijk head home the winner on debut at Anfield.

With Liverpool charging towards their first league title in 30 years, and recently returning from their Club World Cup triumph in Qatar, success in the FA Cup wasn’t exactly at the top of their priority list in 2019-20.

They would eventually go on to be knocked out of the competition by Chelsea in the fifth round, but not before a derby victory that Liverpool fans will cherish for a very long time.

A Liverpool 2nd XI vs. Everton’s strongest side

On paper, this was a match that Liverpool really shouldn’t have won.

It was the perfect opportunity for the Toffees, who had recently appointed Carlo Ancelotti as their manager, to register their first Anfield victory this century.

Jurgen Klopp made nine changes from the team that increased their Premier League lead to 13 points with victory over Sheffield United earlier in the week.

Nat Phillips made his debut, as did new signing Takumi Minamino, while Yasser Larouci would also end up being thrown on for his first appearance when he replaced the injured James Milner early on.

Harvey Elliott, who started on the right of Liverpool’s attack, became Liverpool’s youngest-ever player in the competition at the age of 16 years and 276 days.

By contrast, Everton fielded a team that was pretty much at full strength, with the likes of Jordan Pickford, Seamus Coleman, Morgan Schneiderlin, Lucas Digne, Theo Walcott, Richarlison and Dominic Calvert-Lewin all in the XI.

This would surely be a step too far for a Liverpool team that were unbeaten in their past 23 home games against Everton, wouldn’t it?

Adrian was forced into good saves to deny Calvert-Lewin, Mason Holgate and Richarlison, and Everton should really have got themselves on the scoresheet at least once in the opening half an hour.

But having successfully navigated Everton‘s early pressure, Klopp’s young Reds began to grow into it. Pickford kept out Origi’s low drive after an incisive pass from Elliott, and after the break, the Belgian and Williams both forced the England goalkeeper into action with speculative efforts from long range.

In truth, Liverpool’s supporters would probably have been relatively satisfied even if Liverpool’s youngsters had only managed to force a replay, but the Anfield atmosphere was electric, and in what was a remarkable season, there was a sense that something special could be on the horizon.

With just less than 20 minutes remaining, the game was won with a moment of class from an 18-year-old Scouser wearing red, and it was no ordinary goal.

Pickford was hurried into a clearance by the onrushing Larouci, typical of the young Reds’ spritely energy throughout, Lallana and Oxlade-Chamberlain recovered possession, before Origi combined well with Jones on the edge of the box.

The youngster made room for a shot, before unleashing a completely instinctive curled effort that found the back of the net via the underside of Pickford’s crossbar. What a way to score your first senior goal for Liverpool.

A year ago, @curtisjr_10 scored a stunner to knock Everton out of the #EmiratesFACup! pic.twitter.com/zsbG54y82q

It was a strike worthy of winning any match and proved to be the only goal of the game, as Liverpool’s young Reds ensured Everton‘s 25-year wait for a trophy went on.

In a season that produced so many memorable moments, this was another highlight, and a game plenty of Liverpool supporters will never forget.

“So many extremely good performances”

Jones, of course, was the player everyone wanted to talk about, but Klopp was keen to make sure there was recognition for the other youngsters that impressed on the night.

Chirivella was excellent at the base of Liverpool’s midfield, while Williams and Larouci looked far from out of place at full-back.

“I must say one thing, because everybody asks me about Curtis Jones but there were so many extremely good performances tonight,” Klopp said in his post-match press conference.

“The goal was exceptional and the boy is an outstanding player. But I cannot understand why nobody asked me so far about Pedro Chirivella, Neco Williams or Yasser Larouci. Is this a sign we want to give the boys? You have to score, otherwise we ignore you?

“Let me speak about Curtis – an unbelievable player, Scouser, very confident, can’t wait to play in the first team. Good, rightly so. He is in a very good way. I’ve known him three-and-a-half years, he made big steps, will be a Liverpool player if nothing strange happens, 100 per cent. Great.

“In Germany, because of a different system, he would still play one year 100 per cent in the youth team and nowhere else. Here, he is around the first team.

“I like that the boys used all our patterns tonight to cause Everton problems. It was brilliant, absolutely brilliant.”