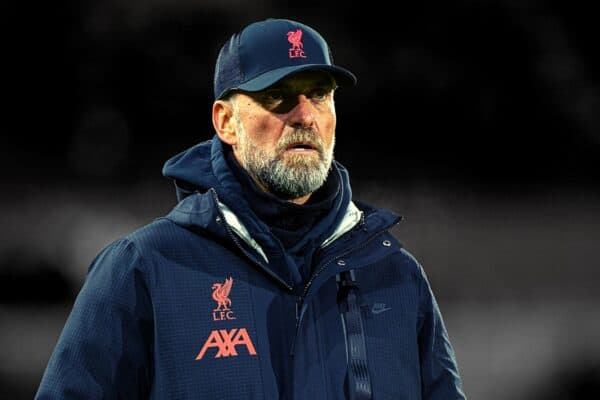 The evolution of Liverpool FC and getting back on track

After the glory and a stunning season that almost brought four trophies to Anfield, it is clear that Liverpool are going through a slow evolution.

The past five years have been an incredible journey for Liverpool Football Club.

During that time the team has won every single trophy possible. They’ve contested three Champions League finals and achieved over 90 points in the Premier League three times.

It is only the tiniest margins that have stopped us from complete domination during this period.

The relentless consistency of challenging at the top over a sustained period is no fluke as well.

Sometimes there is a season where everything goes your way and you can win a trophy, but to keep coming back year on year is the sign of a great team and a very well-run football club.

In parallel with that success on the pitch, the redevelopment of Anfield and the creation of the AXA Training Centre at Kirkby have given the club the foundations for the future.

But after an incredible five-year cycle, the club now finds itself at the start of a new one.

And although the great news is that a lot of the same architects of the past five years are still with the club, there are some headwinds that need to be navigated for the club to stay on a progressive path.

The foundation of our success since Jurgen Klopp arrived has been stability.

The structure at the club has been hugely successful, with Michael Edwards leading a hugely talented team whose use of data and analytics has given us a competitive advantage in recruitment.

That is a hugely important asset for a self-sustainable football club.

But the sporting director model only works if the manager and his staff are in alignment with the recruitment team. The trust between the two is critical.

One of the key benefits of a sporting director is that they will be able to take a more dispassionate view, outside of the day-to-day, and look more long term when making decisions.

Under Edwards, it always appeared clear that the relationship with Klopp and FSG president Mike Gordon was very strong.

But since Edwards announced his resignation in 2021, the model that has contributed to so much success at Liverpool seems to have broken down in places.

Edwards was replaced by Julian Ward, his deputy, but after just six months in the role Ward handed in his resignation.

This, we soon learned, had been preceded by the highly regarded Ian Graham, the club’s head of analytics and another key voice in recruitment.

With Gordon – the man who has been referred to as the person who runs the club – also stepping aside to focus on seeking investment, there is a lot of instability in the current structure.

That lack of stability is not the fault of any single person. It is likely a consequence of a club that recognises it needs to evolve.

At the end of last season, it is likely that Klopp and his team sat down and reflected on the fine margins that went against us in the Premier League and in the Champions League final.

It has been clear since the signing of Thiago that there is a vision to transition to a type of football which favours control over chaos.

The summer departure of Sadio Mane meant there was a big decision to take on the type and profile of forward that came in to replace him.

Another key factor in the evolution is the age and availability of Roberto Firmino.

His uniqueness has often been undervalued by many, but in effect he has given us two players in one and been such an integral part of our system and success.

Not only did he lead the press from the front, but he also has the intelligence to drop deep and give us an extra body in midfield when we needed it.

In many ways, he is impossible to replace.

If you think of the team as a jigsaw puzzle, this season has seen some of the pieces that were a perfect fit needing to be replaced.

And then, of course, there is the minefield that is our midfield.

Six senior central midfielders whose age profile and injury records have red flags waving everywhere, but all of whom are on long contracts and likely earning in excess of £100,000 a week.

There are multi-faceted reasons why our midfield has struggled, including investment, but sometimes you need to be dispassionate when making decisions.

And that is a major factor in why the sporting director model works.

It is really important to remember that any evolution of style or identity is not a quick, easy or overnight process. It is the same story for new players coming in who are expected to hit the ground running.

But at this specific moment in time, it feels as though the evolution is going too fast – to the point it feels like a revolution. And it doesn’t need to be.

The playbook that won us the lot in the past five years hasn’t all of a sudden become redundant.

If anything, the biggest critique in the moments that matter has been the lack of a plan B.

The polarisation of debate around FSG’s ownership of Liverpool has always lacked balance.

It isn’t popular to think they have been good owners, who have made mistakes but got a lot of big things right. And although they’ve never spent wildly, they’ve spent well.

But following the collapse of the European Super League, it looks as though they have recognised that elite clubs will need more investment than they are able to provide to compete.

I’ve always believed that an expectation any owner will fund unlimited investment in players through their own funds is completely unrealistic. And if they do, you have to question the motive.

Culturally, I am not sure Liverpool will ever accept being a sports-washing project.

So you then look at the best of the rest. And FSG have done exactly what they said they’d do back in 2010.

They’ve not taken a penny out of the club, and under their ownership there have been many moments that have given supporters loads of incredible memories. I am not sure you can ask for much more.

Whatever happens with the ownership of the club, it is clear that more investment is needed.

It isn’t just about the money either, it is also about how you spend it.

So it is equally important that the structure continues to have the checks and balances in place to make sure we spend well and make the right decisions.

The most important thing is that the ownership question is not allowed to linger. Whether or not it is new investment or a full sale the instability of the unknown isn’t a pathway to progress.

And just for the avoidance of any doubt: we do need at least two to three new midfielders, and completely messed up in the summer!

Getting back on track

When things aren’t going well it is incredibly easy to throw the blame around.

But whatever the internal wrangling, there is no question that Klopp, Ward, Pepijn Lijnders, FSG and the players all want the very best for Liverpool.

Nobody will be enjoying this season so far.

Klopp and Lijnders have both been key architects of one great Liverpool team already and they can be again.

Whatever vision they have for the future of the team needs time to evolve, albeit they may need to be a bit more pragmatic at times.

On the pitch, the arrival of Cody Gakpo will give us greater firepower. We’ve only seen glimpses of the best of Darwin Nunez. We’ve Firmino, Diogo Jota and Luis Diaz to come back.

Whether or not we sign a new midfielder this January (which we need to) – we will have the players to outscore most teams.

Don’t underestimate the role Bobby has left to play this season.

The club is seeking new investment. There will either be new owners or a new source of funds into the club. Alongside the infrastructure, this can help enable the club to compete over the long term.

In the short term, FSG cannot allow a chasm in the structure at the club.

It is hugely important to appoint a strong sporting director who can work with Klopp and is in full alignment with the vision and profile of player the club needs.

This summer is a huge one for Liverpool, and we need to spend big but spend well.

Despite this season feeling like a step backwards, there are plenty of reasons to believe that Liverpool will come again.

There’s still every chance of finishing in the top four this season. There are problems that need solving, but with players returning from injury, there is more than enough in this squad for a huge improvement.

And, in the worst case, as we are seeing with Arsenal, a season out of the Champions League can be a blessing as well as a curse.