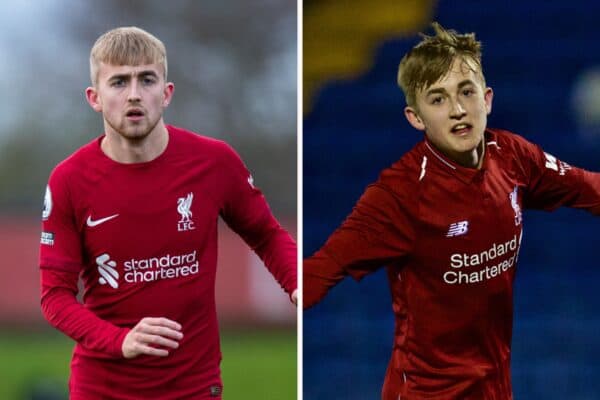 Cain, now 21, joined the Reds at under-9s level and was a standout throughout his academy years, a bright midfield talent who knows how to hit a dead ball.

Despite working his way to the fringes of the senior team, Cain made just one senior appearance for the club – in the 1-0 win against Shrewsbury in the 2020 FA Cup fourth-round replay.

A further 12 games as an unused substitute followed and with other midfield talents at the academy moving ahead of him in the pecking order, it’s time for change and new opportunities.

Cain has now signed a two-and-a-half-year contract with League Two club Swindon Town, a division he is familiar with having spent a season on loan at Newport County in 2021/22.

With the deal now confirmed, for an undisclosed fee, Cain says he is “excited for the new challenge” as he thanked the club for “making me the player and person I am today.”

“After 16 years at @liverpoolfc my time at the club has come to an end,” Cain penned on Instagram.

“It’s time for the next chapter in my career and I’m excited for the new challenge.

“I want to thank all the staff and players through my time at the club for making me the player and person I am today.

“I’ve made friends for life and had unforgettable memories including making my debut at Anfield and winning the FA Youth Cup.

“I wish the club all the best in the future, it’s been a privilege to represent LFC. Thank-you!!”