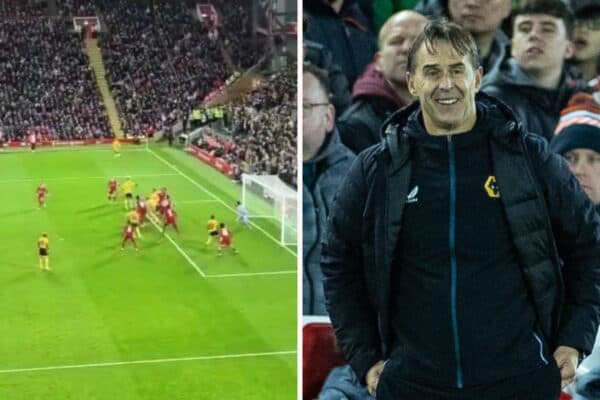 Wolves manager Julen Lopetegui has confirmed the club have contacted the FA for an explanation of why Toti’s goal against Liverpool was ruled out.

The Reds’ FA Cup third-round clash with Wolves ended in controversy, as centre-back Toti looked to have netted a late winner only for it to be chalked off.

Officials adjudged Matheus Nunes to have received the ball in an offside position in the buildup, but it transpired that VAR were unable to make a check as they did not have the footage required.

Though the cameras used inside Anfield could not detect whether Nunes had infringed or not, Lopetegui claimed after the game that Wolves‘ tactical footage proved he was onside.

Wolves have been absolutely robbed tonight. The Toti goal should have stood. Football is broken. #LiVARpool pic.twitter.com/Y6YMjlBGhi

Further angles have since shown that Nunes was not offside, and speaking in his pre-match press conference on Tuesday, the Wolves manager confirmed they had written to the FA.

“Of course, I have seen the images on the internet and I have my opinion,” he told reporters, as per The Athletic.

“We have sent to the FA our comments and we are waiting for an explanation.

“I talked after the match and now we have sent our comments, but it’s very clear something has happened.”

It is hard to argue, given the new angles shared, that Liverpool should not have exited the FA Cup on Saturday night, with Wolves deserving a 3-2 victory.

Furthermore, taking to Twitter after the game, Robbie Fowler gave his opinion that Mohamed Salah‘s first-half strike should have been ruled out, with a “ridiculous” ruling allowing the goal to stand:

Even Mo's goal ruling should be changed, ridiculous… how can a player not be interfering when he forces a defender to try and clear the ball?

Giving his view after the game, would-be goalscorer Toti even claimed that officials are more likely to “help the big teams a little bit” in situations like Saturday’s.

“At the end I tried to speak with them and they said it was offside by a little bit, but I don’t understand how,” he told the Express & Star.

“At the end I saw the replay and still don’t understand how it wasn’t a goal.

“They should have done better. In this type of moment, they help the big teams a little bit and for us that’s not good.

“Sometimes these mistakes help the big teams. It’s frustrating because we fight for a good result and these small things make a difference in the end.”