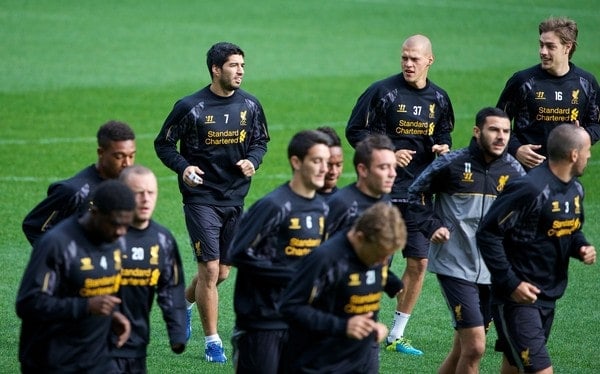 Luis Suarez has returned to training with Liverpool on the Melbourne leg of their pre-season tour as planned. The wantaway Uruguayan striker took part in training at AAMI Park alongside the rest of the Liverpool squad on Monday and will take part in the friendly against Melbourne Victory on Wednesday.

Manager Brendan Rodgers told reporters that he “very much” expects Suarez to stay.

Asked more about the situation, the Reds boss explained that he hadn’t yet spoken to the 26 year-old but intends to do so soon.

“I haven’t had it [talks with Suarez] yet. We only arrived late last night, he arrived earlier than the rest of us, but as we have always been as a club, I am quite relaxed about it.

“Luis is here as expected, he is an integral part of squad and we will chat at some stage.

“He will train today and we will communicate over next few weeks, but we have spoken quite a lot of the summer.

“We will chat more today, but he is a Liverpool player and he will be part of the group. You could see his closeness with squad last night.

“Do I expect him to stay? Very much so. A lot has been said in the off-season, but the reality is that he is very much a player of importance.

“Every player has a value and a worth, but it doesn’t mean we are going to sell him.”

Watch Rodgers discuss the situation below.