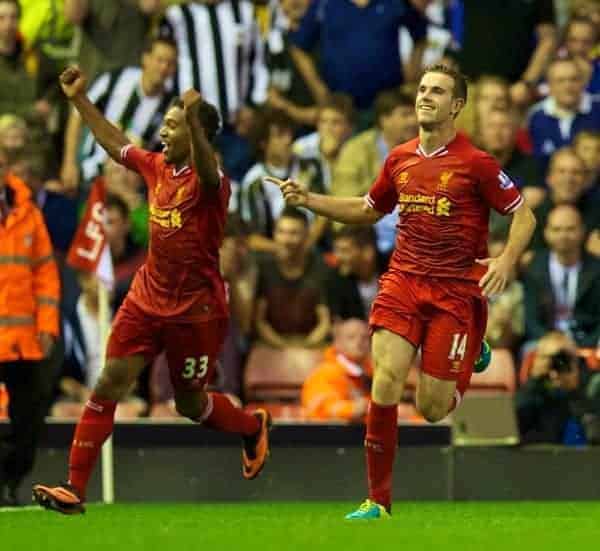 Jordan Henderson says Liverpool’s players will take all the positives from Tuesday night’s League Cup second round victory over Notts County and be fired up for Sunday’s Premier League clash at home to Manchester Utd. Watch all the goals from Liverpool 4-2 Notts Count aet.

The Reds were pegged back from two goals up by the League One side to force the game into extra time, when Daniel Sturridge and Henderson put goals away to stretch the game beyond Chris Kiwomya’s side.

However, Brendan Rodgers’ men were subject to three injuries which forced Aly Cissokho, Joe Allen and Kolo Toure off the pitch. All three are doubts for Man Utd’s visit at the weekend.

But Henderson says the rest of the team have time to recover and prepare to get three points against their arch rivals, despite having to play an extra 30 minutes of football last night.

“It was very a important win to keep that momentum going,” he told the club’s official web site. “We’ve made a good start and another win takes us onto the game against Manchester United.

“We’ll go into that game very confident. We’ll recover well from Tuesday night and everybody will be looking forward to the game come Sunday.”

Henderson also spoke of his relief at scoring the fourth for Liverpool, which took the pressure off an edgy game against County.

“It was a bit of a relief to see the ball hit the back of the net,” he added. “I think at 4-2 we knew the game was probably over as there was not long left.

“It was nice to score. The most important thing was to get the win. We would have liked it to have been a lot more comfortable, but things like that happen in football.

“We’ve got to go on and learn from it and make sure that if we’re in that position again, we see the game out a lot more comfortably.”

Liverpool vs Manchester Utd gets underway at 1.30pm on Sunday, 1st September 2013 and it’s live on Sky Sports.

The club today announced plans to pay tribute to Bill Shankly before Sunday’s game on the week of the great former Liverpool manager’s 100th birthday.