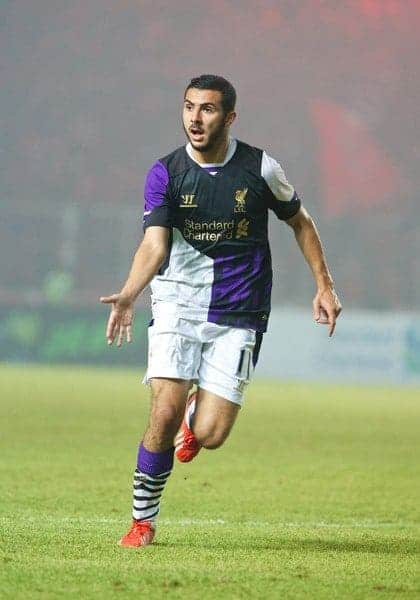 Liverpool winger Oussama Assaidi is set to join Queen’s Park Rangers on loan for the 2013/14 season, according to reports on Thursday. The Moroccan international was signed from Dutch side Heerenveen last summer under mysterious circumstances.

He has since played just 12 times for the first team, failing to score.

QPR boss Harry Redknapp has been looking for options to bolster his midfield and sees Assaidi as capable of playing a part in his side’s fight for promotion back from the Championship.

Despite offers from Holland and Belgium, he will now join Harry Redknapp’s side as they bid to secure an immediate return to the Premier League.

Whilst Alan Nixon of the Mirror reports:

Hoops boss Harry Redknapp has been looking for extra width and pace as he changes the look and style of his side.

Assaidi was never favoured by Brendan Rodgers since his £3million arrival last summer, briefly making appearances as a substitute in Cup ties.

He had featured for Liverpool during their pre-season preparations this summer, but was always expected to find a new club to play his football once the season began.

Before joining Liverpool, the 24-year-old had played at three other clubs – Heerenveen, De Graafschap and Almere City.

He has won 13 caps for Morocco to date, scoring one goal.

UPDATE: LFCnewsNL in Holland are reporting that Assaidi has his eye on a loan move to Feyenoord.

@thisisanfield Assaidi said to Dutch media he knows nothing about QPR and wants to join Feyenoord on loan.

Meanwhile, Assaidi isn’t the only one heading to the Championship from Liverpool.

Midfielder Jay Spearing is set to rejoin Bolton on a permanent deal. He spent last season at the Reebok Stadium on loan, but has been told by Brendan Rodgers he has no future on Merseyside.