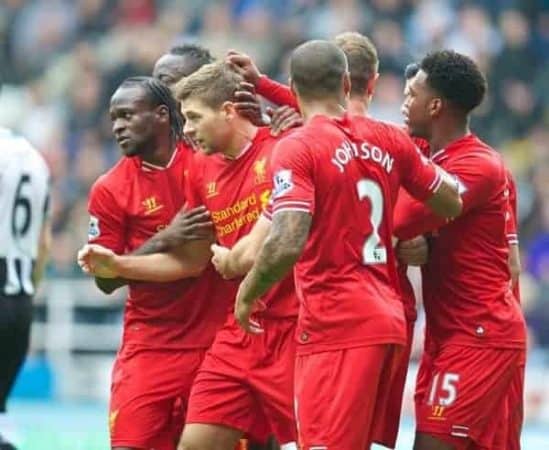 Liverpool were made to work for a 2-2 draw by ten-man Newcastle Utd on Saturday lunchtime in a match they will be disappointed to take only a point from.

Aly Cissokho came in for the injured Jose Enrique, whilst Glen Johnson returned from injury to replace Raheem Sterling on the right.

Lucas Leiva missed the game due to the birth of his daughter earlier in the morning. Martin Skrtel kept his place in Liverpool’s defence, ahead of Daniel Agger.

Liverpool fell behind twice in the game, with a Daniel Sturridge goal 18 minutes from time rescuing the draw.

A Yohan Cabaye strike from 30-yards decieved Simon Mignolet in Liverpool’s goal to put the home side 1-0 up on 23 minutes.

The Magpies continued to produce some good attacking football and for long stretches of the first half Brendan Rdogers’ men were on the back foot.

However, when Mapou Yanga-Mbiwa pulled down Luis Suarez in the box shortly before half-time, Steven Gerrard cooly stepped up to put the resulting penalty away for the equaliser.

Yanga-Mbiwa was given his marching orders by referee Andre Marriner.

It was Gerrard’s 100th Premier League goal, becoming only the 24th player in the league’s history to do so.

The Reds came out for the second half looking hungry to get the goal and wrap up three points, but it was Newcastle who took the advantage at the next twist of the game.

Luis Alberto replaced Mamado Sakho to help Liverpool’s attacking threat shortly after and on 72 minutes Suarez made his way into Newcastle‘s area, squaring the ball to Sturridge to head home.

Both sides had chances to win it late on and the home side held Liverpool off very well considering their one man deficit.

A wicked free kick from Suarez right at the death was met with a fine save by Tim Krul in Newcastle‘s goal, before Marriner blew for full time.

The result will be seen as a blow for Brendan Rodgers’ side, although the point does move them back to the top of the Premier League table, albeit temporarily with Arsenal playing Norwich at home on Saturday afternoon.