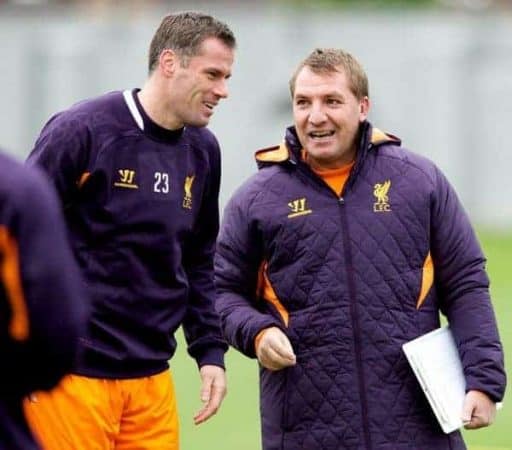 In the second part of his four part series this week on This Is Anfield, Romanian writer Alex Irimia charts the progress of Liverpool boss Brendan Rodgers in his first year and a half at the club.

They say that you can truly see a person’s character in that person’s darkest hour.

A period with many rough patches, last season provided enough dark hours for the Liverpool manager.

Beginning with the horrible start of the campaign, the frustrating closing days of the summer transfer window, the lack of depth in the squad exposed during the campaign, the inevitable retirement of the club veteran and vice-captain, Jamie Carragher, injuries and loss of form, “bitegate” and the resulting suspension of the club’s best striker – all climaxing with the never ending Suarez getaway story during the summer, the whole last season was full of hardships.

If you think about it, it was more than a handful for a young manager in his first year in charge of one of the biggest clubs in the world.

But the fact was that Brendan Rodgers has dealt with everything thrown his way in a very mature, cool-headed manner.

It made a huge impression on me, personally, that even though dealing with such problems constantly, many of which not of a light scale, I’ve never seen the new Liverpool boss lose his temper, or even giving the impression that he would be on the verge of losing it.

He manifested his discontent in a calm, polite way, proving to be a pillar of composure and calmness in some very troubled times. And that spoke volumes both about his strong personality and his leadership abilities.

Probably the hardest part of a leader’s job is to take the unpopular, yet necessary, though decisions. Everyone wants a part of the success when it occurs, but when it comes down to making though calls nobody would like to be the one to do it, and almost instinctively everybody turns to the leader.

A false leader will hesitate, a genuine one will act promptly. Although he has been in charge for only a year and few months we have had the opportunity to see that Brendan Rodgers is not a man to shy away from such hard duties.

We have already seen him push firmly towards the exit doors those deadwood players who failed to establish themselves at the club and didn’t look like making the cut into the new boss’s plans. One by one, Rodgers saw out the likes of Joe Cole, Charlie Adam, Stewart Downing or Andy Carroll.

This not only unburdened the chequebook of some high wages but it also created room for some fresh reinforcements.

But there was a moment this summer that showed, more than others, that the new boss has real courage as well as being able to consciously assume the fans discontent, or even, is some cases, rage.

It was the bringing in of Simon Mignolet and the shipping out of the veteran and Kop idol Pepe Reina. Viewed from any angle, it seemed like a make it or break it moment and it must have required all the steadiness the young manager had at the time.

Looking back we can now see that Rodgers was right to proceed as he did and by doing so he resolved one of the most pregnant problems of the team. But, at the time, the voice of the majority of Red’s fans wasn’t an advocate of Rodgers’s nor was the general opinion in the press.

Credit to him, the Irish stand firm by his decision, and despite all the opposition, he went on and stuck to his plan, proving his doubters wrong.

Football knowledge is probably the most obvious criterion favouring the Reds’ boss.

Rodgers has made a name for himself in the best way possible. He didn’t follow the common steps to becoming a football manager.

He never occupied the assistant manager position to any other club manager. Instead, he started coaching in his early 20’s in the youth system of his playing club, Reading, due to a career ending knee injury, and went from there onwards.

He travelled through Spain attending coaching sessions and courses, learning any way he could and picking up skills and knowledge from anyone and anywhere, all that before his 30’s.

That prompted him to declare at one point that the person from whom he learned most was himself for he had to turn to self-education from a young age. Invited by Jose Mourinho in 2004, Rodgers joined the coaching staff of Chelsea’s academy where he impressed massively, earning a promotion to the manager of the reserve’s team in 2006.

He occupied the position until 2008 when he got his first club manager position at Watford. After that, he went on to manage his former club, Reading, for a short spell before moving to Swansea City in 2010.

Everyone knows that Rodgers’s time with the Swans was a massive success which earned him the reputation as one of the most exciting young managers in present football. It also earned him the new position as the manager of the Liverpool Football Club starting with 1st of June 2012.

Later he would describe his new status as the most challenging task he ever had.