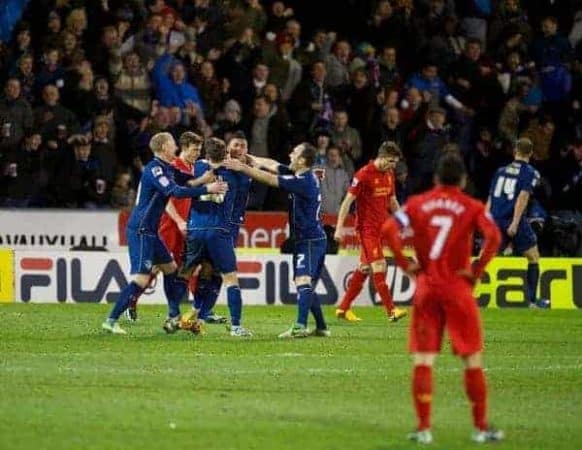 Liverpool will play Oldham Athletic in the third round of the FA Cup after the League One side beat Mansfield Town 4-1 at Field Mill on Tuesday night.

A goal on 12 minutes from Ross Dyer helped the Stags take a half-time lead in the FA Cup 2nd Round Replay, but the Latics struck back in the second half through goals from Daniel Philliskirk and Jonson Clarke-Harris.

A late strike from Matteo Lanzoni put the game beyond the hosts, before Mansfield captain John Dempster was sent off for handball inside his area and Adam Rooney converted from the penalty spot for the fourth goal.

In the draw for the third round, made back on Sunday, 8th December, history repeated itself when the Reds were drawn to play the winner of Mansfield vs Oldham.

Last season, Liverpool beat Mansfield 2-1 away in the 3rd round of the competition thanks to goals from Daniel Sturridge and Luis Suarez.

The Reds were later knocked out at the fourth round stage by Oldham in a thrilling 3-2 encounter at Boundary Park.

Lee Johnson’s side will relish the opportunity to giantkill Liverpool for the second successive season, this time at Anfield.

The tie will take place over the weekend of the 4th and 5th of January, with final dates and kick-off times yet to finalised, subject to TV broadcasts and policing.

Everton were also drawn at home in the third round of the Cup — they face QPR at Goodison Park, so at least one of the two Merseyside teams will be forced to move their game.

The full draw for the 3rd Round of the FA Cup is as follows: