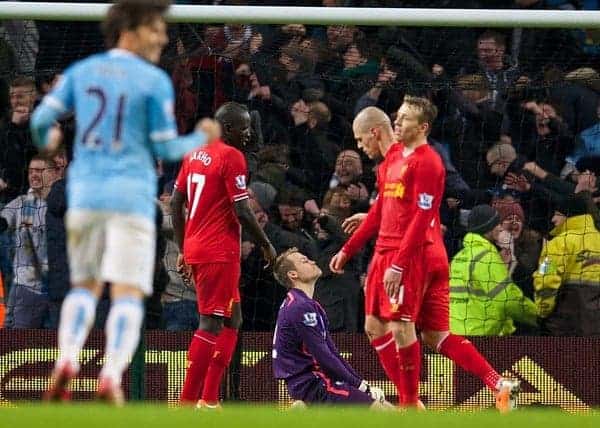 Liverpool let a 24th minute lead at Manchester City slip in a thrilling encounter at the Etihad Stadium on Thursday evening.

Brendan Rodgers made just one change to the starting line-up that beat both Cardiff City and Tottenham recently—Aly Cissokho replacing the injured Jon Flanagan at left-back.

Philippe Coutinho cooly finished from an acute angle after Raheem Sterling had forced City goalkeeper Joe Hart to commit to give Liverpool a deserved lead just after the half-way point of the first half.

But Liverpool’s lead was short-lived. Vincent Kompany got ahead of Martin Skrtel to head home a corner, before Alvaro Negredo’s shot on the stroke of half-time found it’s way in over Simon Mignolet, unable to get a firm hand to the Spanish striker.

Second half shots in front of goal for both Glen Johnson and Raheem Sterling were spurned.

In an exciting game of chances for both sides, Liverpool will feel disappointed to have come away with nothing, and also aggrieved to have not won at least one penalty appeal for pushes on Luis Suarez, whilst Sterling was wrongly adjudged offside when through on goal during the first half.

The defeat means Liverpool move down to fourth in the Premier League table, three points off league leaders Arsenal.

Rodgers’ side travel to third-place Chelsea next on Sunday for their final game of 2013.

Philippe Coutinho 1-0 — thanks to @MostarLFC