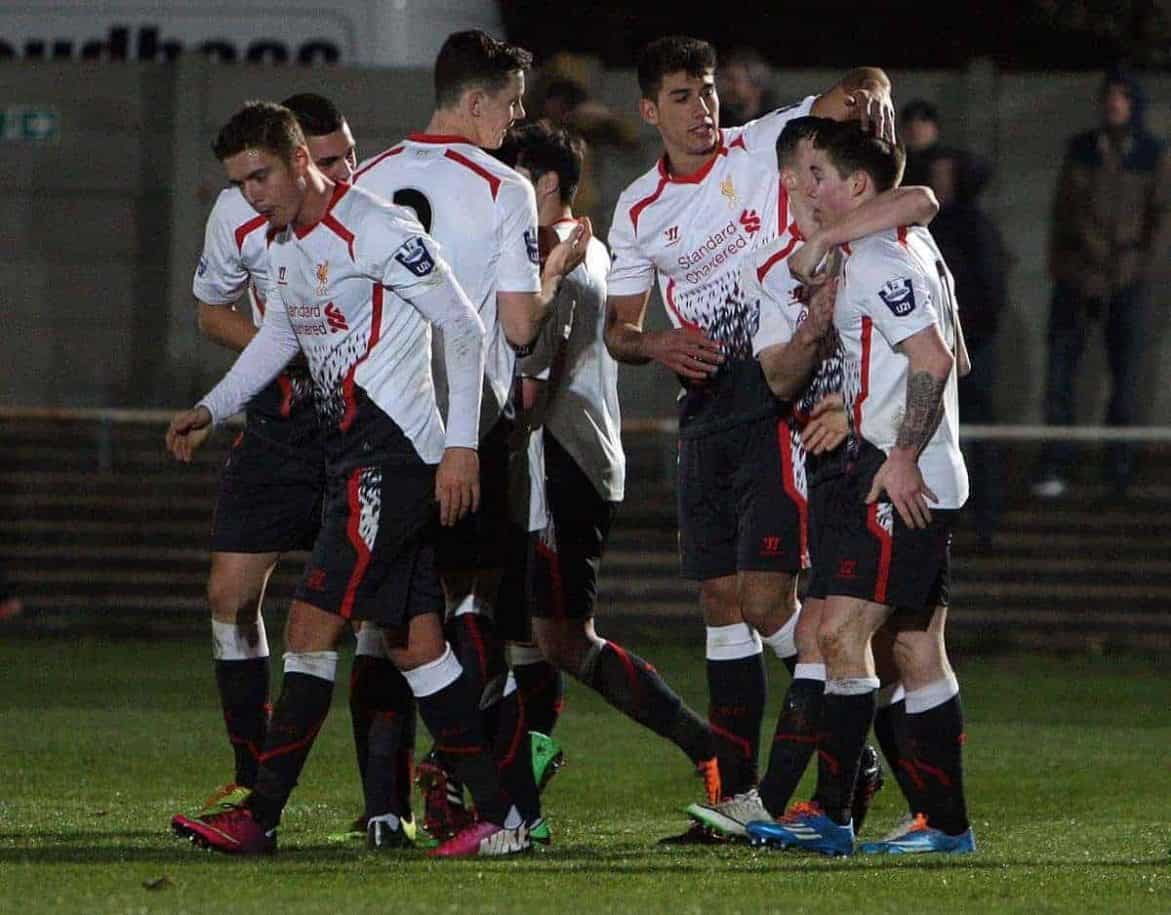 Liverpool under 21s moved a step closer to qualifying for the end of season play-offs with a hard fought 1-0 win away at Chelsea on Monday night. A goal midway through the first half from the in-form Jack Dunn handed the young Reds maximum points and saw Alex Inglethorpe’s side record back to back victories.

Liverpool raced out of the traps and nearly took the lead after just 11 seconds, but Kristoffer Peterson’s ball across the face of goal was intercepted just in time by Chelsea keeper, Jamal Blackman, with Dunn dangerously lurking.

It was the home side who registered the next attempt on goal, as Captain Lewis Baker tried his luck with a speculative 35-yard effort but his well struck shot produced a comfortable save from Ryan Fulton.

Down the other end, a clever lifted through ball from Joao Carlos-Teixeria down the right released Dunn, but the youngster who has been in good goal scoring form of late, fired his effort high and wide of the Chelsea goal.

It was a lively start to the match at Aldershot and with ten minutes gone Fulton was called into action again, this time tipping Tika Musonda’s shot round the post after patient build up play from the hosts created the opportunity.

Heavy rain and difficult conditions were making it hard for either side to enjoy a sustained period of time in possession, leaving both teams scrapping for ownership of the ball and making for a physical encounter.

After Peterson was fouled,  Teixiera struck an excellent curling effort  from the resulting free kick from 25 yards out which almost snuck in at the near post, but the ball flew into the side netting prompting celebrations from the Reds’ fans in the crowd that were ultimately short lived.

But on 23 minutes, Liverpool took the lead through talisman Dunn. Peterson won possession on the half way lined with a perfectly timed slide challenge leaving Randall to pick up the loose ball, and the right back provided a perfectly weighted through pass, releasing Dunn who slotted home for his tenth goal of the season.

Inglethorpe’s side then had a chance to double their lead, but Jordan Lussey’s strike was straight at Blackman in the Chelsea goal. The home side upped the ante and forced a number of corners as they looked to drag themselves level, but the young Reds defended strongly.

Chelsea did almost draw level a minute before the interval as striker Islam Feruz unleashed an effort that flew narrowly over Fulton’s crossbar. An eventful first half saw Liverpool head into the break with a 1-0 lead.

Liverpool started the second period like they did the first and the lively Peterson turned his marker before flashing a shot across goal, after a fantastic dummie from the influential Teixeira set him through.

The away side continued to look threatening and finally looked like they’d net a second goal but Lussey’s strike from Peterson’s cross was scrambled to safety after some desperate defending from the Chelsea back line.

It was only the woodwork that kept the score-line at 1-0 this time as the impressive Teixeira rifled his second free-kick of the game, a stunning curling effort, crashing against the far post with Blackman well beaten.

Chelsea increased the pressure as the second half wore on but Inglethorpe’s side continued to look extremely dangerous on the break with the hosts’ defence really struggling to deal with the Reds pace and intelligence.

Liverpool looked more comfortable as the game progressed and limited the home sides’ chances to a minimum and substitute Alex Kiwomya fired Chelsea’s best opportunity of the second half wide as he dragged his shot across goal.

Jack Dunn almost sealed the game but he was denied his second of the match in the nick of time after Blackman pushed Peterson’s initial strike dangerously across goal.

What was an excellent night for the young Reds turned into a special one, as midfielder Marc Pelosi returned to action for the first time in 14 months after suffering a horror injury against West Brom in February 2013.

The American took no time to get involved in the action and could have cemented the win with less than ten minutes remaining but a fantastic piece of last ditch defending prevented what would have been a dream comeback.

There was a last minute scare for the youngsters as a dangerous strike from distance forced Fulton to parry with Feruz lurking, but the keeper gathered the ball after the rebound. Fulton was then called into action once more late on, but he pulled off a stoppage time save as Liverpool held on to claim the victory.

Next up for Inglethorpe’s side is the small matter of the derby against Everton in a week’s time.