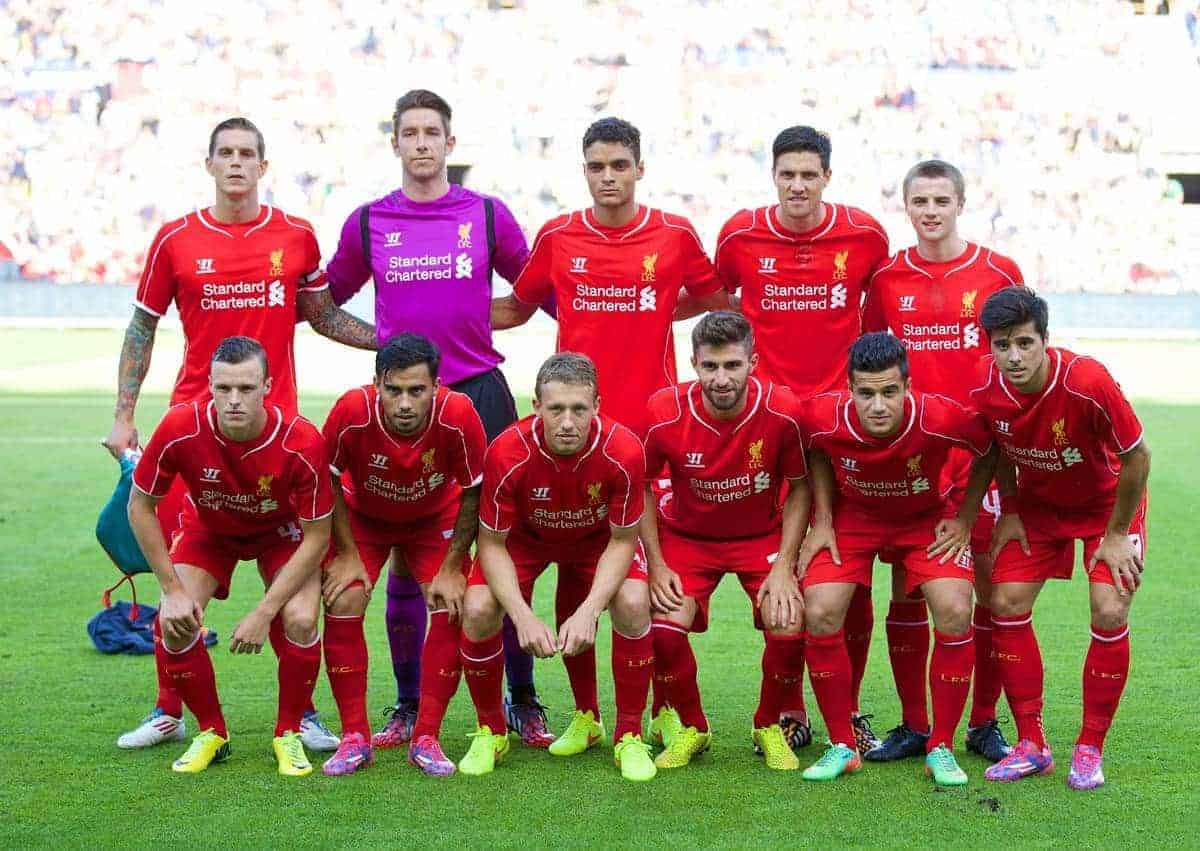 Liverpool kicked off their pre-season with a 2-1 defeat to Brondby in Copenhagen on Wednesday night. Here, Jack Lusby runs the rule on the 23-man squad for this game.

Although it ended with a defeat, Wednesday night’s opening pre-season encounter was an encouraging exercise for Brendan Rodgers’ fledgling squad.

Missing World Cup stars such as Steven Gerrard, Mamadou Sakho and new signing Adam Lallana, the Reds manager selected a squad comprised of a mix of youth and experience.

As Brondby’s final pre-season warmup game, and Liverpool’s first, the disparages between match fitness were clear, and Rodgers’ side struggled to assert themselves at times.

Nevertheless, this first 90 minutes of 2014/15 will have given Rodgers an insight into the progress some of his younger players are making, and perhaps whether the time is right to move on some peripheral figures.

On the Way Out?

With rumours circulating that long-term servant of the club Lucas Leiva is primed to leave the club, temporarily at least, if the interest is there, this friendly may have been the beginning of the end for the Brazilian midfielder.

Operating as the anchorman within a midfield three in the first half, the 27-year-old performed capably but without any real flourish.

If the offer arises, Liverpool may have seen the last of Lucas this summer.

The same can be said for Australian goalkeeper Brad Jones, who still inexplicably wears the No. 1 shirt for the Reds.

One man who isn’t going anywhere, according to his manager, is former Brondby man Daniel Agger, with Rodgers speaking highly of the 29-year-old after the game:

“He’s an excellent player, an international captain, and he’s had a very good career at Liverpool. He’s at a good age, 29, and his experience can be good for us this season.”

Perhaps the Ulsterman sees Agger as his experience fourth centre-back for 2014/15; whether this is mere posturing, however, remains to be seen.

Elsewhere, days are surely numbered for Conor Coady, Kristian Adorjan and—despite getting his name on the scoresheet—Kris Peterson.

Starting at right-back and later moving to centre-back, Martin Kelly continued his role as a peripheral figure within the Reds’ squad.

At 24 years old the local lad will likely never be a permanent fixture within a Liverpool starting line-up, but there remains a feeling of warmth towards the defender following long-term fitness issues.

Elsewhere, Spanish playmaker Suso did little to impress in his 45 minutes in Copenhagen.

Although the 20-year-old has expressed a desire to fight for a new deal at Anfield, a higher work-rate and more refined quality will be required for last season’s Almeria loanee to force a way into Rodgers’ reckoning.

Unfortunately, operating on the opposite flank to Suso, Portuguese midfield Joao Carlos Teixeira performed to much the same level as his fellow Iberian.

At 21 years old, Teixiera finds himself in the same boat as Suso at this juncture—behind the effervescent talents of Coutinho—and this season will surely be make-or-break for the midfield pair.

As is tradition during pre-season, an abundance of youth talents were deployed by Rodgers against Brondby.

This build-up period will give the Reds manager a chance to survey these lesser-known names and assess whether more time is to be spent at the club’s academy, a loan spell is required, or a role in the first team beckons.

New signing Kevin Stewart and goalkeeper Danny Ward should find themselves very much in the former group.

Elsewhere, highly-regarded talents Adam Phillips, Lloyd Jones and Jordan Rossiter may be pushing for a place in Rodgers’ squad for cup games, and their development is best served at the club for the time being.

Limping off with injury on 22 minutes, Portuguese centre-back Tiago Ilori should be looking at another spell on loan in 2014/15.

Helping Derby County to a play-off jaunt at the end of last season, bullish defender Andre Wisdom is reportedly set for another loan spell, with West Bromwich Albion the likely destination.

Finally, young left-back Brad Smith could benefit from a spell in the Championship this season—an exceptional prospect, a prolonged run of games would do the Australian-born defender a world of good.

Pushing for a Place

With Rodgers looking to continue reinforcing his side prior to the Premier League’s commencement next month, several of Wednesday night’s more high-profile names could see themselves pushing for a place in the Reds starting XI.

Welsh midfielder Joe Allen was brought on as a more experienced head for the second half, and did little to tarnish his reputation, performing tidily.

Elsewhere, despite being two of the first names on Rodgers’ list last season, defensive pair Martin Skrtel and Jon Flanagan may have a fight on their hands next season, with the Liverpool boss actively looking to add to his back line.

Returning from a successful loan spell at Sunderland, Italian forward Fabio Borini looked decidedly rusty on Wednesday night, but could well cement his place as Liverpool’s fourth-choice striker with a successful pre-season.

Whilst, at 18 years old, Jordon Ibe could be considered one for the future for the Reds, an imposing performance against Brondby saw the winger’s stock rise further.

In particular, a storming run down the left flank to set up Peterson’s goal should see Rodgers scribbing Ibe’s name onto a list of first-team players for next season.

Alongside Ibe, by far and away Liverpool’s best player on Wednesday night was Brazilian playmaker Coutinho.

Having not been included, thankfully, in Luiz Felipe Scolari’s World Cup squad for this summer’s tournament, the 21-year-old looked fresh and ready for a competitive season ahead in this defeat.

The midfielder thrived in a central role, with a series of impressive flicks and dribbles punctuated by decisive passes in the final third.

With new signings Adam Lallana and Lazar Markovic adding to the first-team pressure in the attacking midfield roles, Coutinho has proven why he should continue to feature prominently for Liverpool this season.

Which players from Liverpool’s squad against Brondby do you see featuring next season? Let us know in the comments below.