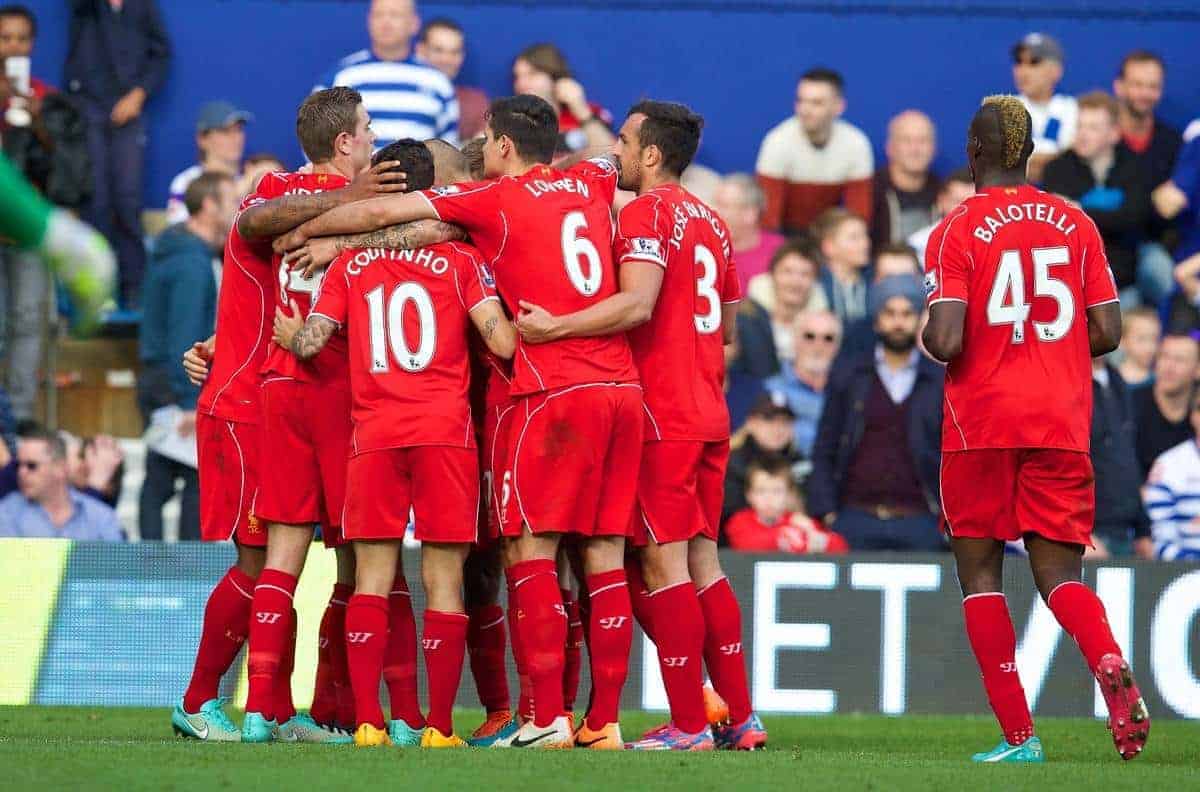 Have your say in this month’s Liverpool Player of the Month vote, with Jack Lusby presenting your five options. Liverpool are apparently in crisis. Looking at the form guide above perhaps tells a different story, particularly given the only two losses for Brendan Rodgers’ side came in the Champions League — unknown territory for many of this young side — and one of those against the defending champions.

A disappointing 1-0 loss away to Paolo Sousa’s FC Basel kicked off October, and Liverpool’s performances have followed suit ever since.

Limp and uninspired, the Reds have struggled through this past month.

However, back-to-back victories in the Premier League, 2-1 at home to West Bromwich Albion and 3-2 away to Queen Park Rangers, along with a further 0-0 stalemate at home to Hull City, have bookended the unsurprising 3-0 decimation at the hands of Real Madrid at Anfield.

Rounding off the month with a late 2-1 win over Swansea City saw Rodgers’ side add the gloss to October’s form guide.

It may be easier to select players for criticism, with Liverpool’s four of Liverpool’s back five arguably warranting a place of their own on any shame list, but who has made our nominations for Liverpool Player of the Month for October?

Take a look back at the top performers of the of the last month, and have your say—who gets your vote?

Brazilian playmaker Philippe Coutinho was in and out of Rodgers’ first team throughout October but, whenever utilised, made his mark with a series of effervescent displays.

The midfielder made the difference between a win and a draw against QPR, was the best player on the park before the Reds fell to Madrid’s might, was Man of the Match against Hull despite playing only 30 minutes, and inspired the Capital One Cup win over Swansea.

What more can you ask?

Amazingly, Coutinho started just half of Liverpool’s games in October, with the No. 10’s attacking and creative talents outstanding throughout.

It is often argued that the Brazilian is best-used as an impact player—but a series of enduring performances from kick-off should demand a starting spot for Coutinho moving forward this season.

After returning from injury sustained in pre-season in September, Adam Lallana fell just short of our inaugural 2014/15 Player of the Month vote, but continuing his impressive start on Merseyside in October has made the Englishman a no-brainer this time around.

Particularly impressive was Lallana’s decisive contribution against West Brom, with a well-taken finish capping some great skill for the former Southampton man’s first goal in a Liverpool shirt.

Enjoying the freedom of a fluid forward line, Lallana grew in confidence at Anfield.

More effective in a central role, the England midfielder has struggled sometimes when deployed wide, but Lallana has shown enough throughout October to make him one of Rodgers’ top summer signings.

Finishing in fifth in September’s Player of the Month vote, Liverpool’s Mr. Dependable Javier Manquillo once more makes the grade after another run of consistent performances on the right-hand side of Rodgers’ back line.

Alongside the currently-farcical central defensive partnership of Dejan Lovren and Martin Skrtel, it could be expected to see Manquillo dragged into the widespread criticism of Liverpool’s defence, but the Spaniard holds his head high.

A shuttling display in the clean-sheet performance against Hull was the Spaniard’s highlight for October. It was just a shame his attacking counterparts couldn’t produce the decisive quality in the final third.

October unfortunately presented Raheem Sterling with a miserable tete-a-tete with England manager Roy Hodgson, with the latter claiming the Liverpool forward had complained of feeling “tired” on international duty.

The 19-year-old has looked jaded at points throughout this early Autumn, but his performances have remained key for this Liverpool side.

Interestingly deployed alongside Mario Balotelli as an off-the-shoulder striker against Madrid, the teenager displayed a nuanced adaptability belying his young years.

Not his best month, but Sterling’s so-so is better than most on Merseyside.

Liverpool vice-captain Jordan Henderson’s form tailed off towards the end of October, but the Englishman began the month in fine fettle. Not least this came with the 24-year-old’s dominant performance in the home victory over West Brom.

Central to Liverpool’s fortunes in what is perhaps the only convincing win of October, Henderson’s box-to-box qualities cut through a well-organised Albion side.

The midfielder scored one and set up another, with his astute piece of skill combining well with the movement of Lallana, and Henderson’s intelligent follow-through play saw him set up by Sterling to score the winner on that Saturday afternoon.

He was your Player of the Month in September’s vote, at a landslide 41 per cent of the vote, but will the No. 14 continue his reign?

Who gets your vote for Liverpool Player of the Month for October? Let us know in the comments below.