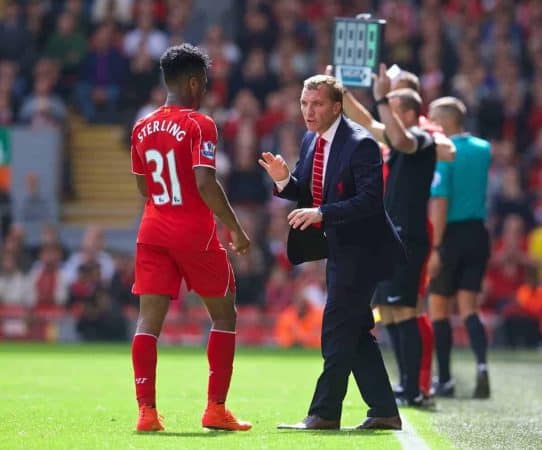 QPR vs Liverpool: How The Reds will line-up in the captial

Brendan Rodgers’ Reds head to the capital on Sunday to take on bottom of the league QPR. Ben Twelves takes a look at the team selection options for the Liverpool manager with a much healthier squad now at his disposal.

Liverpool return to Premier League football after another unwelcome international break when they take on bottom of the league QPR on Sunday, and the Reds will be looking to back up the win against West Brom last time out with another positive result.

The match is the first of seven fixtures in 21 days for Brendan Rodgers and his team meaning that the Liverpool boss is going to have to utilise as many of the players at his disposal as possible throughout the hectic period to keep his team fresh and firing.

A kinder run of Premier League matches that started positively at Anfield over two weeks ago, is joined by a mouth-watering encounter against Real Madrid and League Cup tie with Swansea both at Anfield, making up six games this month and four in nine days alone.

BR: We have no thoughts towards the Real Madrid game – the next game is our most important, and that’s QPR away.

Even though the Reds endured a winless September in the league, Rodgers’ side haven’t lost much ground on rival teams as they too have struggled during the opening part of the season.

But Liverpool can’t keep dropping points and hoping others do the same, and the time to start finding some more fluid performances and consistency is now with winnable league games ahead starting with QPR on Sunday.

Rodgers has been waiting a long time for it, but he can now finally welcome back Joe Allen, Emre Can and Daniel Sturridge to match-day involvement after lengthy spells on the side-lines thanks to international duty injuries.

BR: When Sturridge is playing, he’s one of the top European strikers. It’s important for him to play games to prove that consistently.

The two week break has hopefully allowed the three recovering players plenty of time to not only recover from injury, but gain some kind of direction towards fitness, putting them in the frame to be able to play on Sunday from the beginning if needed.

Boost for #LFC as Rodgers reveals that Dejan Lovren should be fit for Sunday's trip to QPR.

Liverpool were handed injury scares once again from the international break with Dejan Lovren and Lazar Markovic both suffering injuries, but the Reds manager has confirmed that he is hopeful over the Croatian defenders’ availability for the match with both players having trained on Friday morning.

Should Lovren fail to make the game, Martin Skrtel and Kolo Toure would be likely to recommence their slightly uncomfortable partnership in the heart of defence, but there are also question marks over who will play as the full-backs at Loftus Road.

Alberto Moreno and Javier Manquillo both played for Spain under 21s in the international break. But on Tuesday Moreno was left out of the squad completely due to “technical reasons” and not injury, as stated by manager Albert Celades. Manquillo completed two 90 minutes for his side.

Glen Johnson’s return to fitness and game time in the 2-1 win over West Brom means the England right-back could therefore feature on Sunday ahead of the Spanish youngster, who played both games while on national duty.

The midfield numbers are to be boosted significantly with Can and Allen’s availability alongside Steven Gerrard, Jordan Henderson and Philippe Coutinho, and all five will be hoping for a starting berth on Sunday.

It remains to be seen whether Raheem Sterling will be involved from the start or on the bench, but that choice could be made slightly easier with the return to fitness of Daniel Sturridge, who could continue his partnership with Mario Balotelli up front with the improving Adam Lallana an option to play instead the 19-year-old.

A lot depends on Lovren’s fitness defensively, and if he does make it, it’s safe to assume would begin alongside Skrtel. If his slight injury does dictate change at the back though, Rodgers has two options for centre half.

Kolo Toure is naturally the immediate replacement with Sakho unavailable but, Can – who has played as a centre back previously including for Germany under 21s recently – could also be a genuine alternative.

Playing the German as a central defender however would represent a bold move as he returns from six weeks out and a potential first game back out of a first choice position, so the experienced Ivorian does seem like the unavoidable choice if Lovren fails to make it.

At full-back, a lot of football since joining and a busy international period should see Glen Johnson come into the team in place of Javier Manquillo, with Alberto Moreno continuing at left back.

In midfield Steven Gerrard and Jordan Henderson are nailed on starters and they should be joined by Philippe Coutinho, keeping Allen on the bench to start with and Sterling  ahead of them in the number 10 role.

Providing he is fit and ready to go, Daniel Sturridge should resume his place up front with immediate effect and play alongside Mario Balotelli, who has badly missed his strike-partners presence alongside him.

A much healthier squad now available – if the players hoped are ready turn out to be – should see Rodgers return to the formation that suits his players best – the four-diamond-two and with the changes to shape and personnel, Liverpool should look like this on Sunday:

However, if Rodgers wants to adopt a slower approach to the returning and international players, he could do so by shaping his team either one of these ways which would see Liverpool look like this:

Sunday’s game in the capital represents a tricky fixture for Liverpool, but after ending the winless streak against West Brom at Anfield 15 days ago, and heading south with a much stronger squad available, it’s the perfect chance for the Reds to produce another positive performance and result.