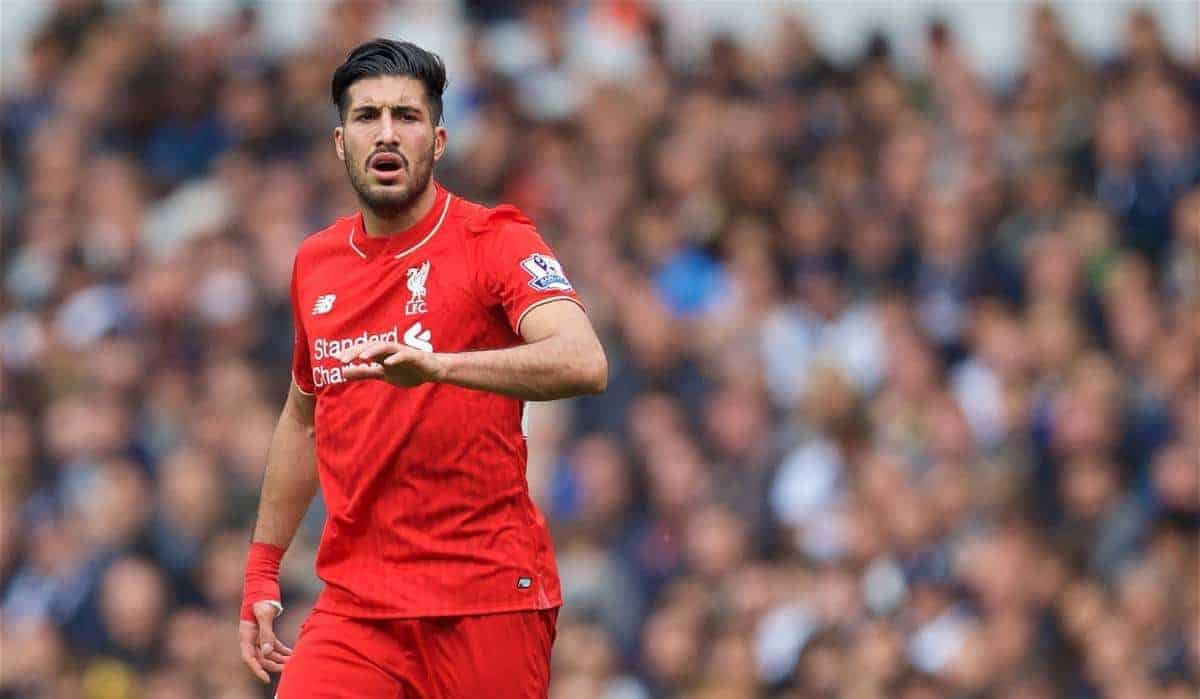 Liverpool will work around the absence of the suspended Emre Can against Newcastle United, says Jurgen Klopp, despite the midfielder’s improving form.

Can is one of the Liverpool players to have most benefited from Klopp’s arrival as Liverpool manager, with a string of top-class performances coming from a regular role in midfield.

But the 48-year-old will have to make do without his compatriot on Sunday, with Can facing a one-match suspension.

The former Bayer Leverkusen man received a fifth yellow card of the season in Wednesday night’s 6-1 win away to Southampton, meaning he is forced to sit out at St. James’ Park.

This could be deemed a considerable loss for Liverpool, but Klopp believes it will not be the “biggest problem” to navigate the absence of a player who he clearly admires.

“There’s a big difference between him and some other players [in that] he’s 21.

“He speaks the same language so I can talk more with him, that’s a problem for him!

“He’s a really good player and I like working with him.

“He’s not available for the next game but it should not be the biggest problem—we have other quality players.

“Like every young player with big talent you have to learn, and that’s what he should do.”

Joe Allen, who produced an exceptional performance against Southampton in midweek, is likely to continue his spell in the first team, while Klopp has also suggested that a returning Jordan Henderson could feature.

This plethora of options is becoming a welcome issue for Klopp as he moulds his starting lineup for each game—and comes as a stark contrast to the problems faced by his predecessor.

Brendan Rodgers came under considerable criticism for fielding Can out of position in his defence in 2014/15.

But facing a number of key injury problems at the time, the Ulsterman was given little option.

Klopp vindicated Rodgers’ decision as he continued to discuss Can’s qualities, explaining that “it’s no problem to play in different positions.”

“What I heard and read is even Brendan thought his best position is in midfield. That’s clear,” he continued.

“But with his size, speed and strength in one-on-one situations of course he can play centre-half.

“We have the problem in this moment that we have two centre-halves, the next option would be Emre.

“For a young player it’s more important to play than to play in the right position.

“It’s no problem to play in different positions. I never had the discussion with him about a position.

“But its been very good that he has played in midfield and improved his game.”

Fortunately for Klopp, Can’s suspension does not bring the typical discussions of how to compensate for this key loss, but more so which of his strong reserve options can benefit.

Can’s absence comes at the right time, with the Reds in a healthy position as travel to St. James’ Park.