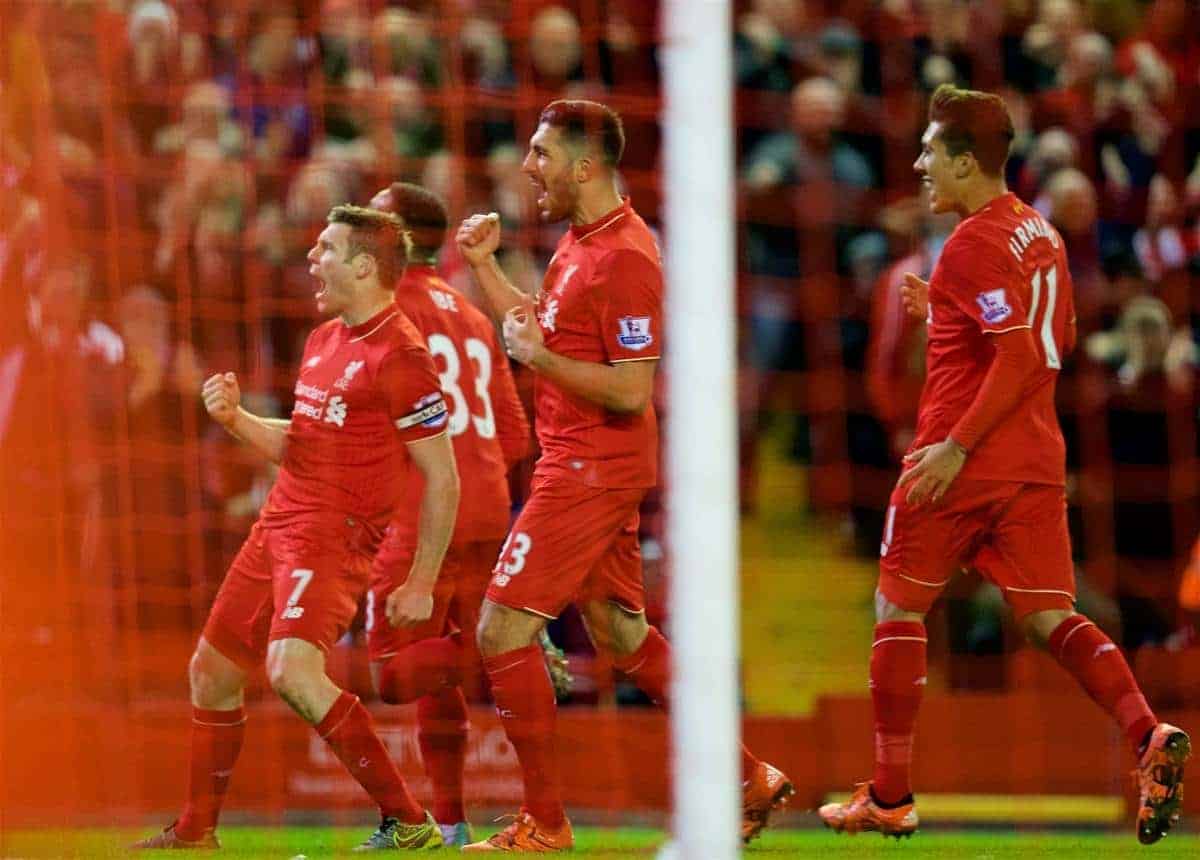 Liverpool’s latest victory at home to Swansea City has heightened confidence that this is a side capable of challenging at the top of the Premier League.

Liverpool Football Club has a lot to answer for when it comes to my mental health.

From the exhilaration of beating Chelsea at the Bridge (where, let’s be honest, we generally walk away with our tail between our legs) we go and get beaten by a very limited Crystal Palace team at home.

Then of course, we go to the current league leaders and absolutely batter them with a performance harking back to the power and glory of two seasons ago.

So when Swansea, with one league win in nine, come to Anfield, we’re surely gonna give them a footballing lesson and bang in goals left, right and centre—right? Erm…no.

That’s as hard as we’ll have to work for a win this season, and only for a penalty—correctly given, but could just as easily have been ignored by the ref—we might well have had another home-day disappointment.

This inconsistency is something Jurgen Klopp is no doubt fully tuned-in to. How can Firmino be so exceptional at City, then so ineffectual against Swansea? Surely they have wind in Brazil? And I’m not talking about the feijao!

How can Emre Can be struggling one week, then be putting in a man-of-the-match performance the next?

Why can we look so creative and dazzling with three midfielders playing as a front line, yet so anaemic in front of goal with a £32.5 million striker on the pitch and two of the same three midfielders around him?

But for all these recent ups and downs, for all the lack of goals (Chelsea and City excepted, of course) and for all the defensive nervousness shown at home to Southampton and Swansea, one quite wonderful stat remains…

We have won six of the last seven games in all competitions.

Liverpool and Their Top-Four Rivals These six wins include victories away to City and Chelsea. Yet, irrespective of those superb results, we are still flying quietly under the radar right now. We are undoubtedly going to finish outside of the top four according to most pundits and so-called experts…

After all, City, United and Arsenal are shoe-ins and our squad isn’t good enough—just ask ‘Arry Redknapp, he’ll tell ya.

With that in mind, let’s do a brief analysis of each of the top-four rivals–I’m not including Leicester because they won’t be in the mix in another 10 games.

Arsenal: Are they good enough? One point from six against West Brom and Norwich, after having been torn a new one by Bayern and outplayed by Spurs would suggest not.

Their injury list continues to grow and their manager seems as clueless as ever in addressing their glaring weaknesses. They’ve won just one of their last five…and Sanchez is injured.

Man United? The hopeless Wayne Rooney and the now ineffectual second coming of Thierry Henry is the sum total of their strike force. Plan B remains to throw on the toilet brush and lump balls to it for the final 15 minutes.

They are so ridiculously defence-minded that George Graham just bought a season ticket. Rooney being made their captain was a Van Gaal masterstroke…because you don’t drop your captain and that’ll do for me, thank you very much.

Chelsea have a manager so ridiculously egotistical, he’s become a parody of himself. If he was in an empty room he’d pick a fight with the walls. The team is in turmoil, the manager is a laughing stock, and crucially, they are eight points behind us in the league.

Their only genuine goalscoring threat couldn’t find a dummy this weekend, so he threw his bib out the pram instead. And you know what they say…if you wanna get better see a doctor. Pity they sacked her. It’s only fitting that what is a joke of a club is finally making us all laugh.

Spurs are a genuinely improved team under Pochettino and are showing some promise. But, come on, they’re Spurs! Even when in their best form for many a year, they’ve drawn with Liverpool, Arsenal, Chelsea, Everton and Leicester while losing to United.

Joking aside, Man City remain the most likely this season, even though we absolutely spanked them on their own patch and Spurs gave them a hiding at White Flag Lane. They do have undoubted quality with Aguero, Silva, Toure, Kompany and Hart as their core.

But any team who can lose two games 4-1 in their first 13 league games of a season are by no means a certainty to win anything.

Is it a coincidence that both 4-1 defeats this season have come at the hands of teams managed by two of the youngest, brightest, most progressive coaches around? Pelligrini, to me, remains unconvincing as a truly top-class coach.

In contrast, this Liverpool team, with Klopp’s philosophies being embraced, tweaked and fine-tuned with each passing game, is on an upward trajectory you just don’t see with any of our main rivals.

He also has the added bonus of two top-class “new signings” with the return of Henderson and Sturridge even before the transfer window opens.

The front line now reads ‘Benteke, Sturridge, Firmino, Coutinho, Ibe and Lallana.’ This group is a long way from firing on all cylinders as every one of them (Sturridge aside) has so far shown inconsistency to varying degrees this season.

At the same time, every one of them has shown glimpses of genuine promise.

Ibe is growing by the week, the Swansea game easily his most mature in a Liverpool shirt; Lallana, Coutinho and Firmino were unplayable against City; Benteke has scored some pearlers even while looking a yard of the pace since returning from injury.

If all six of these can click in to gear and add consistency to promise, there’s power, technique and movement enough to scare any team.

Behind them, the cupboard is not as bare now, with the return of Henderson, the continued improvement of Can in his rightful position, and the new-found promise/confidence of Milner and Allen.

Each of these has embraced the new manager’s values and their performances can be considered ‘very encouraging’ rather than ‘excelling’ thus far.

Lucas, who, for all his stellar defensive work has never offered enough going forward, has shown glimpses of adding this extra important dimension to his game. This also means he’s getting his weekly yellow card for unnecessarily booting opposition players further up the pitch these days, making their free-kicks less dangerous.

Whichever way you look at it, the midfield solidity and variety of options seem so much more promising than they did 10 games ago.

Behind them, Clyne and Moreno are looking more and more the part. Both are consistently seven-out-of-10 performers now, without the defensive lapses too often associated with Liverpool’s defence in the recent past.

The true and tested four-at-the-back system seems to be back to stay, and goals are no longer being leaked so readily.

Klopp has quickly managed to plug the holes by instilling structure and tactical discipline throughout the team. The high press and discipline doesn’t just help the attack.

A Work in Progress The defence still remains, however, a work in progress, and the one area where I fear we are still most vulnerable, especially with the imperious Sakho injured.

Take the Swansea game: after a highly encouraging defensive display for 76 minutes, Skrtel and Lovren between them made four defensive errors between minutes 77 and 83, each born out of panic and fragile confidence.

Palace, Southampton, United and West Ham have all scored against us after the 80th minute this season and it almost happened again.

It’s easy to look back now and applaud the clean sheet on Sunday, but if any one of those errors had resulted in a Swansea goal (as they could so easily have done) we’d all be in a different place this morning after again throwing away a slender lead.

The only difference between this game and Southampton at Anfield was that the Saints punished our late defensive vulnerability whereas Swansea did not.

But I’m not trying to be critical, just realistic. Defensive solidity, just like the midfield and attack, is improving, game after game and we’re winning an awful lot of matches because of it.

I still believe we need one or two class reinforcements to be brought in, but if the current rate of progress continues in all three areas of the pitch – and with Klopp at the helm, why shouldn’t it – this is going to be one helluva team.

So, for those writing us off—and I took some time to read other clubs’ blogs over the weekend, whereby, according to them, City, Arsenal and United already have the first three positions already sewn up—think about this: we have Jurgen Klopp. They don’t.

…and let’s not forget—because it’s worth repeating—we have already played every single one of our major rivals away from home. Only one beat us; two of them, we schooled.

So, given we now have a far superior manager, United and Arsenal both have old-school managers stuck in the their old-school ways, Chelsea are rubbish and Spurs are Spurs, there is absolutely no reason to believe we can’t surpass at least most of them.

So, let me finish by asking this one simple question:

Given the state of all of our rivals, given that each of them has to come to Anfield, does anyone think it outside the realms of possibility that over the next 24 league games we can’t achieve seven more points than City and Leicester, six more than United, five more than Arsenal and three more than Spurs?

Because if we do, we’ll not just surpass some of them…we’ll surpass all of them.