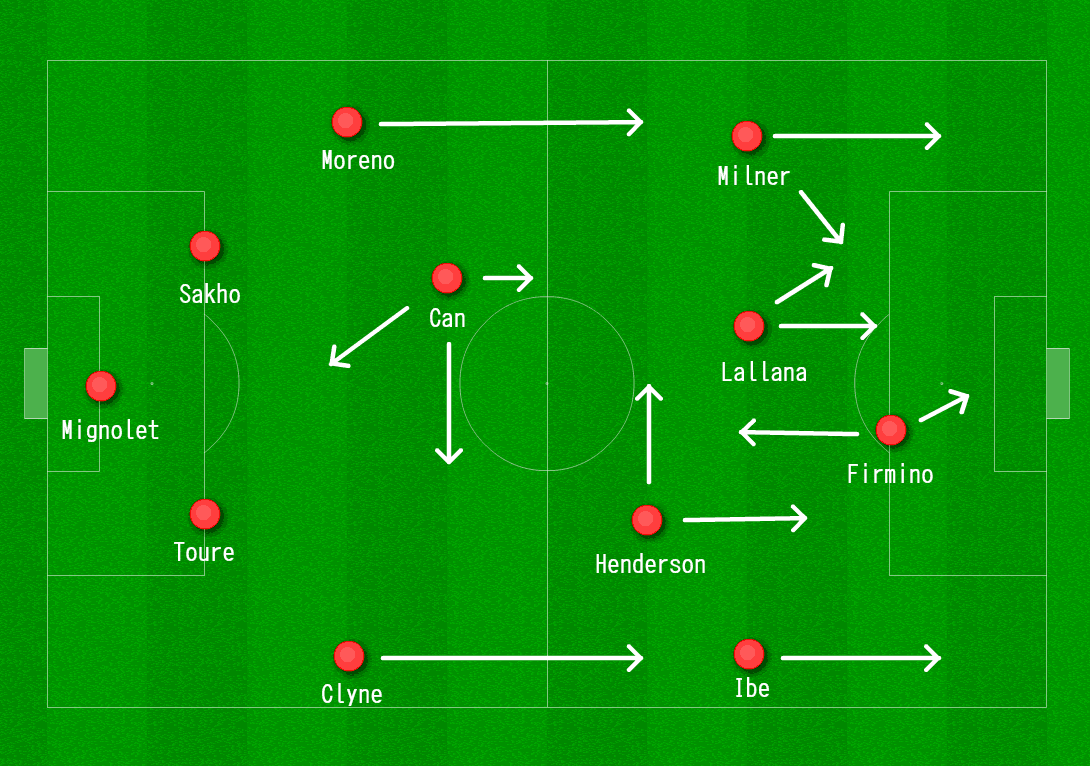 Deployed as Liverpool’s No. 9 on Wednesday night against Arsenal, two-goal hero Roberto Firmino played a key role as the Reds’ attacking pivot.

Though it took a late Joe Allen strike to secure the draw with Liverpool, Jurgen Klopp‘s side produced a largely impressive performance against the Gunners at Anfield.

Buoyed by a number of returning stars, including Mamadou Sakho, Jordan Henderson and Jordon Ibe, the German made 11 changes to the side that drew 2-2 away to Exeter City in the FA Cup on Friday night.

Keeping the same shape however, Klopp deployed his strong side in a 4-2-3-1 formation.

This saw a two-man midfield of Henderson and Emre Can once again provide Liverpool with the balance required to build in the attacking third.

James Milner, fielded on the left wing, dovetailed with Adam Lallana and Jordon Ibe in support of lone striker Roberto Firmino, who was once again preferred to the worryingly abject Christian Benteke.

It was the Brazilian’s role that proved pivotal, and with Firmino on top form, Liverpool dominated in the opening stages.

Though serving as the Reds’ No. 9 for the night, Firmino spent the majority of proceedings dropping deep, switching roles with the impressive Lallana.

Firmino’s successful spell with Hoffenheim saw him thrive in this role, and allowing the 24-year-old time and space as a floating centre-forward saw Klopp harness this potential.

The £29 million man scored twice in the first half, one coming in the box and one an exceptional curled effort from 22 yards out.

This showed the benefits of deploying Firmino in this role, but with Liverpool continuing to struggle in defence, Klopp was forced to roll the dice in the second half. A goal from Aaron Ramsey and two from Olivier Giroud gave Arsenal a 3-2 lead before the hour mark, and it took just 11 minutes following the Frenchman’s second for Klopp to introduce his ‘plan B’.

Benteke came on in place of Milner, with Lallana dropping out to the left flank.

With Benteke filling the role of Liverpool’s centre-forward, Firmino’s duties altered slightly, and while the forward was not as effective in front of goal following this switch, he was similarly influential.

Benteke continued to contribute with meandering movement and improving buildup play, with Firmino dropping into pockets to combine with Lallana, Alberto Moreno and Jordon Ibe.

But with Liverpool opting for a direct approach in the closing stages, Klopp sent on new loan signing Steven Caulker as a makeshift striker, and Firmino’s contribution diminished, with Allen’s sumptuous volley making the difference before stoppage time.

But Klopp should perhaps take most heart from this Bundesliga export.

So far under the 48-year-old’s charge, Liverpool have looked at their most devastating with Firmino leading the line.

Having enjoyed an outstanding performance from the Reds’ No. 11 against Arsenal, Klopp would be wise to acknowledge this.